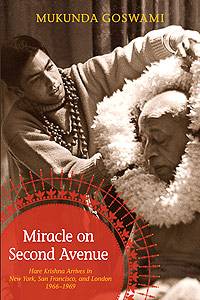 Please accept my obeisances. All glories to Srila Prabhupada

After a long time we have MIRACLE ON 2nd AVE Mukunda Goswami Mharaja’a account of the establishment of ISKCON Krsna Consciousness in New York , San Francisco and London.

The book was recentely published by Torchlight Publishing in Mayapura and was available at teh Gaura PUrnima Festival I just looked for it on Krsna. com and could not find it.

I had a hard time putting it down and was feeling lost when I findished rreading. I gave my copy to one devotee who had lost his enthusiasm for preaching. He got so excited and claimed it had changed his life. He is recommended it to his friends and is reading it again.

The writing is so peronal that it is hard to describe. The descriptions of how they started the movement in Sanfrancisco I found to be most “miraculous”. Shyamasundara, Malati, Yamuna, and Guru dad, excpet for Yamuna cooking for Janaki’s wedding, had not even met Srila PRabhupada, but just by hearing about him from Mukunda, became empowered to work tireslessly to spread Krsna Consciousness and to attract Srila Prabhupada to xome to San Francisco.

All can say it that all devotees should do whatever they can to get this book and read it.

The following is from Torchlight Publishing

The year is 1965. An elderly Indian swami arrives in New York City determined to start a worldwide spiritual movement. After a harrowing sea journey on a freighter, where he suffers two heart attacks, his only possessions are a few cases of books and eight dollars, he meets a few people willing to help him. From a small storefront on Second Avenue in New York’s East Village, a worldwide spiritual movement miraculously takes form.

In a vividly personal and up-close account of the beginning years of the Hare Krishna movement (1966-1969) in three cities: New York, San Francisco, and London, Mukunda Goswami, one of the first members of the religious group, describes the optimism and energy of those early followers of His Divine Grace, A.C. Bhaktivedanta Swami, whom they affectionately called “the swami.”

Mukunda Goswami takes us to the Bowery where he first helps the swami move from a dingy rented loft to a small Lower East Side storefront in Manhattan—thus founding the first Krishna temple in the West. Gradually the number of followers increases and includes many icons of the sixties such as Allen Ginsberg.

During the “Summer of Love” (1967), after opening a temple in San Francisco’s Haight-Ashbury neighborhood (the center of the hippie movement), Mukunda and a handful of followers bring the swami from New York to join them. They host the Mantra Rock Dance concert, where the swami appears along with some of the biggest names in rock music. Thousands chant along with the swami, and cement the small movement’s importance to the American counterculture.

In 1967 this same small group of spiritual pioneers heads to London. There they befriend George Harrison and John Lennon of the Beatles. George helps them open a temple and produce the Radha Krishna Temple album. One of the recording’s tracks is released as a single and quickly rises to the top of the charts, turning Hare Krishna into a household phrase.

Success in these three cities catapults the small spiritual movement into a worldwide phenomenon. Mukunda Goswami brings the reader along with him to those years and those times. One feels the intimacy the early followers had with Srila Prabhupada, and we experience the movement’s formative years in those unusual times.

“Miracle on Second Avenue is the best description yet of those fine days of endless horizons, when everything was possible…” — from the Introduction by Shyamasundar Das Adhikari