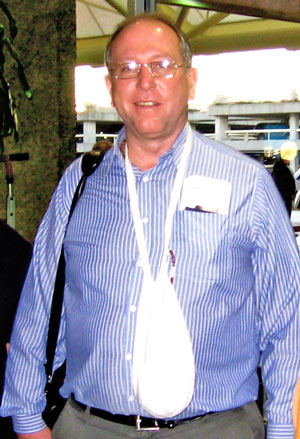 By now the entire worldwide devotee community must have heard of the tragic events that took place in Manipur on Janmastami. The devotees of ISKCON Manipur wish to thank everyone for their continued prayers and blessings for all of the vaisnavas who were injured and for those who have left this world. We will continue to provide updates on the situation.

At this time, we would like to bring attention to the condition of Bhojadeva dasa and also make a humble appeal on his behalf for funds in order to help pay for his medical expenses.

Bhojadeva dasa is a disciple of Srila Prabhupada who joined in 1972. Anyone who knows him is familiar with his gentle nature, warm laugh, and expertise in the kitchen.

Bhojadeva was sitting just 8 feet from the grenade when it exploded. His body shielded several devotees from the main force of the blast including H.H. Bhaktisvarupa Damodara Swami. If he had not been sitting there these devotees would have been more severely injured or even killed as Bhojadeva has a very big body and was able to absorb the force of the explosion. Somehow by the mercy of the Holy Names of the Lord he was able to maintain consciousness the entire frantic ride to the hospital. He never stopped chanting the maha-mantra even though he had sustained massive trauma all over his body. The doctors have told us that his maintaining consciousness greatly contributed to his survival as he did not go into shock and was only 5or 10 minutes away from them not being able to save him. By the time he went into surgery Bhojadeva had no pulse or blood pressure. A team of surgeons worked for five hours to save his life. Several of them had been to the temple earlier in the day with their families for darshan, one was passed by emergency vehicles while on his way to the temple and realized he should proceed to the hospital. Following surgery Bhojadeva was moved to intensive care so that he could be monitored around the clock. Afterwards, they commented that anyone else without such a strong constitution, positive outlook and faith would not have survived. The lead surgeon went on do say that he survived due to Lord Krsna’s blessings, to which Bhojadeva replied that Krsna works through his devotees, only to have the doctors humbly state that they were simply doing their duty. There are over one million Gaudiya vaisnavas in Manipur and many of the doctors and nurses come to work wearing tilak.

Bhojadeva is now out of any immediate danger, but he still has a long road to recovery. While he sustained shrapnel wounds over much of his body, the most serious are in the face, chest, abdomen, left arm and hand. The surgeons removed the fragments from the chest and abdomen, they have repaired all of the damage in these areas. A chest tube was inserted for drainage. The areas that will need reconstruction are the more serious of his injuries. His left arm and hand received massive damage, with a 6 inch area inside the elbow being completely blown away. His left hand is broken and the flesh and tendons on the back of the hand are completely gone. Both these areas will need reconstruction and skin grafts. The doctors feel that he can regain 90%-95% of movement in the arm and hand with proper treatment and rehab. The injuries to his face are even more severe. The force of the blast blew a large part of his nose away and simultaneously fractured the bones around the nose and eyes including the orbitals or eye sockets. This has resulted in leakage from the brain cavity which is very serious. Fortunately, the discharge has been lessening and the doctors are quite encouraged with this. Patients with these types of injuries run the risk of developing meningitis. He will need reconstructive surgery to repair the fractures and fix his nose. The greatest area of concern is his right eye, there is inflammation of the optic nerve from either shrapnel or bone fragments. It is possible that he may lose vision in that eye. The hospital in Manipur does not have the equipment to assess the situation further. But the doctors are hopeful that if we get him to a better facility there is a chance to repair the damage. Please join us in praying to Lord Nrisimhadeva that his eye will be alright. We are in the process of moving him to a hospital in Thailand that specializes in reconstructive surgery and doctors can examine his eye further. Jivan Mukta das, Sacirani devi dasi and myself will be accompanying him to Bangkok to take care of him while he rehabilitates from is injuries.

It is on behalf of this sincere disciple of Srila Prabhupada and devotee of Lord Sri Krsna, that we are appealing for financial help with his medical expenses. If you would like help please send you offering by wire transfer or electronic check to:

To send a message for Bhojadeva, ask updates regarding his condition or to let us know of your wire/donation please email: sacirani@yahoo.com

Please continue to pray to Lord Nrisimhadeva and Lord Krsna for Bhojadeva dasa and the other vaishnavas injured in this attack so that their recovery can be speedy along by their blessings. Thank you and Hare Krsna!