Lord Nityananda’s mercy: The magnitude, the motivation and the magic 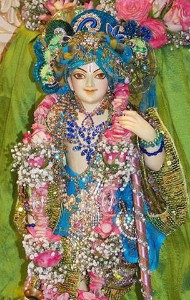 Chaitanya Bhagavata gives us special insight into the transcendental psychology of Nityananda Prabhu. When he heard about the fallen condition of Jagai-Madhai, his eyes lit up with not just compassion but also ambition – the ambition to glorify Lord Chaitanya in a way that would be remembered for all time to come: “These two people are so contaminated that on seeing them pious people feel impelled to bathe in the Ganges to purify themselves. If these sinners can become so pure that people on seein... 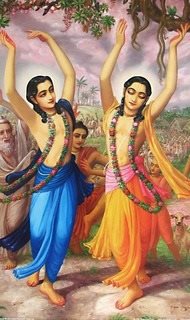 The Holy Names of Lord Caitanya and Lord Nityananda 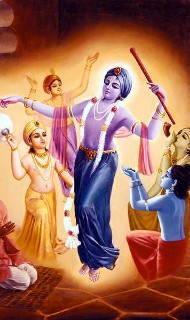 If one chants the exalted Holy Name of the Lord again and again and yet his love for the Supreme Lord does not develop and tears do not appear in his eyes, it is evident that because of his offenses in chanting, the seed of the holy name of Krsna does not sprout. But if one only chants, with some slight faith, the Holy Names of Lord Caitanya and Nityananda, very quickly he is cleansed of all offenses. Thus as soon as he chants the Hare Krsna maha-... A Greedy Gang of Thieves: Srila Vrindavana Dasa Thakura has narrated this astonishing pastime in Chaitanya-bhagavata (Antya-khanda 5.527–706). The leader of the gang, who had been born in a brahmana family, had rejected religious principles to associate with wicked, materialistic people and lead a sinful life of cheating, stealing, and even murder. Fortunately for him, he dwelled in the holy land of Navadvipa when Lord Nityananda was performing His pastimes there. Lord Nityananda was residing with a devotee named Hiranya Pandit... 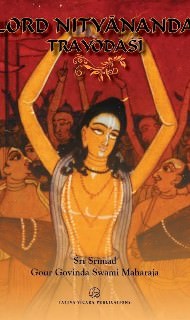 Lord Nityananda - The epitome of Compassion. So Lord Nityananda, he was in the sublime mood. Although he was the Supreme Personality of Godhead, he took the most humble position in order to satisfy Lord Gaurasundara. Caitanya Mahaprabhu was Patitapavana Avatara. That means He came especially to claim the most fallen and sinful of all living beings. And there is nothing that satisfies Lord Caitanya Mahaprabhu more than distributing love of god to another. Therefore lord Nityananda, he would go on both banks of the Ganges and he would ap...

The appearance day of Lord Nityananda 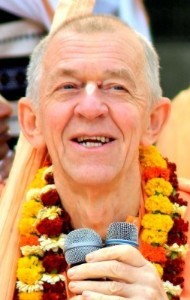 The Maharashtra Marathi Journalist Association undertakes several responsibility programs and as one of its activities awards the prestigious “Lifetime Achievement Award” to personalities who have immensely contributed to society. This year the nominee of this prestigious award was one of Srila Prabhupada’s senior disciples, HH Lokanath Swami.

The all-powerful Personality of Godhead in His boar incarnation 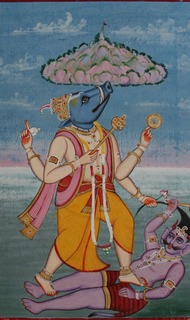 He saw there the all-powerful Personality of Godhead in His boar incarnation, bearing the earth upward on the ends of His tusks and robbing him of his splendor with His reddish eyes. The demon laughed: Oh, an amphibious beast! 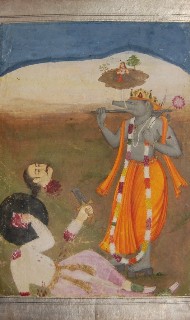 There are different incarnations or appearances of Lord Varahadev. Previously the white boar incarnation has been described. The one that is in the Bhagavatam as we receive it is the story about the red incarnation and His fight with the demon Hiranyaksha. So it is an interesting history and one that is very instructive for the devotees because it is a narrative of people feeling sorry. The history is Diti was feeling unusually lusty. She was feeling impelled to the point where she los... Srila Prabhupada spoke about this in 1977. This is exactly 40 years ago in Bhubaneshwar, right? He spoke about Varaha’s appearance. He said “Ramadi murti su kala niyamena.” Krishna, the original adi pursua, is taking various forms. Ramadi murtisu, especially three Ramas, Parasuram, Balaram and Dasarathi Rama. Rama means enjoyment. Krishna’s enjoyment does not mean that when Krishna appeared as a boar he was suffering. Everything is “Anada- cinmaya-rasa- pratibhavitabhih,” every second is imbued and permeated with ever...

The Battle Between Boar and Hiranyaksha In the Caitanya Bhagavata there is a description how one day Sri Caitanya Mahaprabhu had been hearing the glories of Lord Varaha. And while He was relishing the mood of Lord Varaha, He came to the home of Murari Gupta. And at time He chanted the name Sukara! Sukara! Which is boar! Boar! Right? its the name of the boar, Sanskrit for boar. So He chanted the name of Sukara and then He actually, Lord Caitanya actually assumed the form of Lord Varaha while He was in the home of Murari Gupta.

O Brahma, whatever appears to be of any value, if it is without relation to Me, has no reality According to the Padma Purana, within the material compass there are innumerable material universes, and all of them are full of darkness. Any living being, beginning from the Brahmas (there are innumerable Brahmas in innumerable universes) to the insignificant ant, are all born in darkness, and they require factual light from the Lord to see Him directly, just as the sun can be seen only by the direct light of the sun. No lamp or man-made torchlight, however powerful it may be, can help one see the sun. The sun reveals itself. Therefore the actio...

Questions and answers about the Sannyasa Asrama in Iskcon 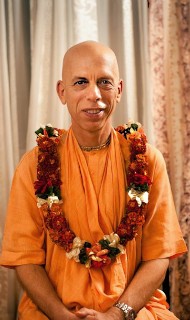 Krishna The God of Varieties The many lessons for Vaishnavas to learn from Lord Vamanadeva 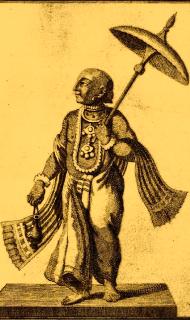 There are many lessons for Vaishnavas to learn from the narration of His activities, as found in the 8th canto, 18th chapter of the Bhagavat Purana (Srimad Bhagavatam). Amongst the lessons are these: 1. That God comes to this world in many forms; not just once, in one form, or even many times in the same form, but many times in many forms. He is never limited by the form, but remains all powerful. 2. That all other gods are meant to offer homage to Him. They did this when, appearing as a young child, he was awarded the sacred thread by Brihaspati, the guru of the gods. The sun god gave Him the...

Honorable Governor mentioned on this occasion, “The spiritual power of Govardhan Ecovillage and the prosperity and wealth of BSE along with the intellectual capacity of IIM Ahmedabad will lead to ultimate prosperity of India and not just of Palghar district and it will prove as a milestone. We wish that through Govardhan Ecovillage, message of serving the people in villages will go to entire India and to the entire world.”

How the “kitchen religion” uses food for good!

For many devotees, the journey involving Krishna consciousness often begins with food. “If you come here and you’re hungry, we’ll feed you – no problem,” says Ajita Cozzi, 57, the director of New Govardhana, a lush 400-hectare site that is Australia’s largest Hare Krishna farm. It's located in the village of Eungella in northern NSW. Followers of The International Society for Krishna Consciousness (ISKCON), founded in 1966, sometimes referred to their movement as the “kitchen religion”. It makes sense when you see how Hare Krishnas, who adhere to a lacto-vegetarian diet, dish ...

Finding Shelter in Times of Suffering 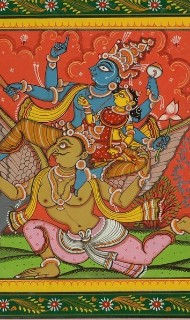 “Can you please speak to my relatives,” a doctor friend requested me after a Sunday feast program in our temple. “Their youngest son died in an accident recently, and they are much traumatized.” I agreed and went to meet the family in a corridor outside the temple hall. The father told me how the son had gone to a picnic with his friends and had drowned in a river. He was just eighteen. I listened sympathetically, and when they asked questions I offered an... 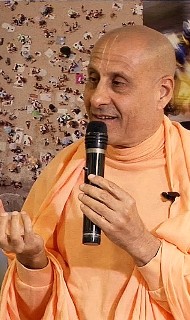 In 1971 I was a devotee of Lord Siva, I was traveling from the area Pashupatinatha to Amarnatha for a pilgrimage in month of August. Very crowded third class train, didn’t sit down for about 40 hours. Finally the train stopped and I wanted to somehow or other to move, so I crawled over people’s heads, somehow I pulled myself out of the window, because I had these attachments. The train started moving and I tried to get back in and it was so very crowded, no wind... 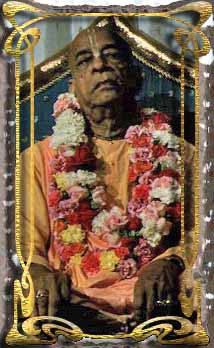