Last week we were honored by the visit of Jnana Dasa, President of the All India Akhara Association, to Sri Sri Krishna Balaram Mandir. This is the association that governs all the sadhus in India as well as the Kumbha Melas. Two years ago in Ujjain, he approved His Holiness Lokanatha Swami to become Mahant, thus giving us our own ISKCON Akhara and our place in the Royal Procession at the Kumbha Melas.

I have started giving lessons on basics of Vedic Scriptures like Vedas, Puranas, Srutis, Smritis, Darsana, Sutras etc. In a short period of two months more than 1300 university students and devotees have joined. The lessons are aimed at new people and those who want to have just a basic knowledge which will help in their preaching.

Again, this year, 2006, the Vaisnava Youth of Sridham Mayapur are offering this festival for the Lord's pleasure. This five-day festival will be held at the Varnasram Building (Cyber Mansion ) on August 5th to 9th.

Recently on occasions of speaking about Bhakti-tirtha Swami I've talked about very close early association with him on the library party when he was a rough gem, he was actually an unpolished gem, but he actually was a fully potent gem in his ability to sell books to college professors by hook or crook.

What could be more festive than a colorful Parade with the Lord of the Universe, free feast, a ferry ride, free concerts and meeting your devotee friends? Yes! It is a total spiritual package of glorifying Lord Jagannatha and association of devotees for two consecutive days in the heart of Toronto. Welcome to 34th Annual Toronto Ratha-Yatra.

It has recently come to our attention that there is some confusion regarding Buddhi Yoga Society, and Vaisnavas C.A.R.E. Inc. (www.vaisnavascare.com). Although both organizations are concerned about the welfare of the Vaisnavas, they are separate and different organizations.

Vaisnavas C.A.R.E. (Counseling, Assistance, Resource, and Education for the Terminally ill and Their Families) is a non-profit organization dedicated to serving the devotees of Srila Prabhupada and Lord Krsna when they require end-of-life assistance. Vaisnavas C.A.R.E. has an ever-expanding network of volunteers around the world who assist the dying devotees whenever and wherever possible.

Thirty years ago, His Divine Grace A.C. Bhaktivedanta Swami Prabhupada requested us to purchase the Fisher Mansion as the new home for Sri Sri Radha Kunjabihari and the Detroit Hare Krishna movement. The media loved the Ford-Reuther connection, and Srila Prabhupada gave Detroit His blessings.

In India, the rule of propaganda is a simple one: Whoever has the loudest speaker gets heard. Volume equals truth. “The truth,” therefore, is whatever information you repeatedly hear the loudest. However, the danger of speaking loudly is that you might not be speaking rightly.

If you have any question you would like to ask His Holiness Sivarama Maharaja, then please write to asksrs@gmail.com - Maharaja will try to answer as many questions as possible via his podcasts.

Those of you that are interested in inovative and congregational book distribution methods are invited to visit our site: www.sastradana.com. If you want to join the endeavor please go to the contact page on our site.

A PROPOSAL FOR IMPROVING ISKCON

My view is that ISKCON is an educational institution. Indeed, in the seven purposes which Srila Prabhupada set down in 1966 when forming ISKCON's first constitution, the first purpose is "To systematically propagate spiritual knowledge to society at large and to educate all people in the techniques of spiritual life…"

In reply to the Hinduization of ISKCON

Yes, we should preach to other Hindus and Vaisnavas in the same way that we preach to Atheists and members of other religious traditons. We should point out the unique aspects of our philosophy to them.

Religious Endowment Minister Ashok Bajpai said the Government did not want to unnecessarily interfere in the affairs of temples, mutts and religious trusts, nor were there any plans to take over their control.

I am glad you have offered your site as a way to be introduced to the leaders of our movement - who are they, what is their service, how do they think, and how are they practically applying the teachings of Srila Prabhupada to their lives and to the spreading Krishna Consciousness.

Support for this revolutionary legal approach which, in effect, invited claims against ISKCON was the direct result of a worldwide consensus of ISKCON membership, and may accurately be viewed as an unequivocal expression in loving support of all of those children who suffered simply unimaginable abuse.

On Sunday 18th June, the three 40 foot high Rath Carts left Hyde Park on their intrepid journey to Trafalgar Square. In front of each cart was a sea of devotees and pilgrims, swarming the streets and filling the sky with the chanting of the Hare Krishna mantra and the beating of drums.

Even in temple and other religious gatherings I have seldom seen the type of welcome we received. Sri Dangi himself entered our names and particulars in the register, a formality that we always have to do before entering any jail. They have these huge wooden doors and inside is like a vestibule with offices on either side and then another set of huge wooden doors.

Special thanks goes to the Gita Nagari devotees for such a welcome and a wonderful festival. For those of you that have not visited Gita Nagari, it is a special place situated in the middle of a forest in Penssilvania. It is yet another one of those wonderful places that we should be grateful to Srila Prabhupada for giving us for our spiritual inspiration. 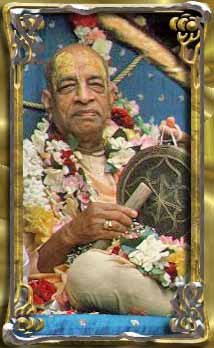