Known as sabu or sabudana, sago and tapioca are both used similarly and interchangeably in Indian cooking, especially as a light-meal choice for Ekadasi grain-fasting days. There is sometimes confusion about which is which because the white beads of sago and tapioca can look identical. But they are from quite different sources

Next Sunday, 23 July, Lord Jaganatha's Ratha Yatra will be held in Denpasar Bali. This is the third year for this big event and it will be attended by thousands of devotees. We are hopeful that both government and Hindu parishad officials will bless the opening ceremonies, which will begin at 10AM.

Suppose if I see somebody smoking, but he is doing Krsna consciousness very nicely. So we should not deride. We shall give him concession to reform. It does not mean that because he has accidentally smoked, smoking, that does not mean he has become immediately disqualified.

I realize that the ISKCON I joined--the ISKCON that I choose to live and work in today--is, in some ways, dramatically different from the one which commanded headlines three or four decades ago. My ISKCON is one which celebrates families and communities, values tolerance and compassion, helps its devotees balance fidelity tradition with the reality of life in contemporary America.

For Whom Does Hinduism Speak?

The strains are usually resolved satisfactorily. The word ‘Hindu’ never appears in a purely intra-communal Hindu context and has no significance in the central religious concerns of the texts, the expositions of bhakti. (emphasis mine) ... there is to be found no explicit discussion of what ‘Hindu’ or ‘Hindu dharma’ means in any of the texts surveyed.

Suddenly all we heard was explosions and firecrackers in the distance and this was almost midnight. I couldn’t figure out what was going on and, seeing the puzzled look on my face, Laxmimoni said, “Pakistan lost.” Everyone was rolling with laughter. That’s why no one was on parikrama, they were all watching cricket!

And while Hare Krishnas have changed, so has American culture. The spiritual mainstream embraces yoga, vegetarianism and concepts like karma and reincarnation. "A lot of people on the streets now believe in those things," says Anuttama Dasa, ISKCON spokesman. "A lot of things that were considered outlandish or threatening are now taking place in the basements of Christian churches."

So, with all this love and care Their Lordships got well again and off They went on Their yearly parade-country style! No fancy big Rath carts, no big skyscrapers to gaze at, just lots of nice hillbilly countryside and lots of excited devotees having kirtan for the pleasure of The Lord.

Cultural Conquest ( a Book Sankirtana for the New Millenium )

I started to think about a major production of the "Srimad-Bhagavatam" done for TV as a miniseries. Every home in the world has a TV set and how great it would be for millions of viewers to see these Vedic stories which is still unknown to westerners.

A devotee is para-dukha-dukhi: he feels pain when he sees the suffering of others. If a devotee cannot bear to see even an ant in pain, how can he enjoy the fall of another devotee? And this bashing of fallen devotees is indeed an attempt to enjoy their misfortune. Otherwise what is the use of dwelling on it?

Sannyasa is not taken in ISKCON in the traditional Varnashram manner. Sannyasa in ISKCON is “awarded” to candidates that apply for it and go through the Society’s system of being considered and placed on a waiting list for years.

For the pleasure of Srila Prabhupada this file contains the following North American results for the month of March: This file is best viewed and printed using a fixed pitch font. In a word processor choose Edit, Select All, and select a fixed pitch font such as Courier.

Tuesday, July 18, 2006, the International Society for Krishna Consciousness (ISKCON) will observe the 40th Anniversary of Hare Krishna coming west. Eastern Tradition Grows Up to Find Many of Its Ideals Have Gone Mainstream, Announces ISKCON Communications

Not a Dry Eye in the House!

A memorable dinner was held on Saturday, July 8, in honor of the retirement of two special Vaisnavis: Laxmimoni dasi and Akuti dasi. In the Alachua Learning Center cafeteria, many devotees attended this special event to honor these two servants of Srila Prabhupada.

Ratha Yatra for the 21st Century!

Alec Baldwin recently did a video for PETA, and many other celebs are actively vocalizing their vegan/veg lifestyles. Why must we reach so far back to the 70's when the majority of the Ratha-yatra attendees weren't even alive then?

So, I would like to ask all of you to please write a personal letter to Mother Caitanya Rupini that is filled with Krishna katha, your service and realizations, favorite verses and purports, Prabhupada lila, and all things glorifying the Supreme Lord and His devotees that will inspire her to persevere in her difficult service.

There have been many comments in relation to the GBC interim decision concerning Dhanurdhara Swami. Most of the comments are more or less requesting the same thing, which is some back ground information as to how the Executive Committee reached their decision.

After seen dandavats. com post about UP plan to control Hindu Temples I want to expose Mexican experience in the same regard. ISKCON first temple (Mexico City) was opened in 1970 by Citsukhananda das (ACBSP), and Guadalajara Temple in 1975.

I am convinced that if you simply glorify Krsna and our books in the best descriptive manner, that anyone and everyone, no matter even atheist or otherwise, they can be convinced to purchase. Of course that is a great art and not everyone can do it, but gradually by practice of preaching in this way, striving to so much present a wonderful picture of our books to the people, gradually you will master the trick how to do it

We, your local servants at New Panihati Dhama ISKCON Atlanta, thank all the devotees for coming to our festival. We understand the great expense most of you occurred to attend this year. Hotel costs were much higher than normal due to the many special events in and around the city that same weekend.

We tiny living entities are followers of vidhi, formal rules and regulations, but we are not against raga-marga, the path of spontaneous attraction. Raga is the highest topic, but it does not look good in our mouth. Hearing big topics from a small mouth, the bhajananuragi-gana, devotees on the spontaneous platform, will laugh at us. 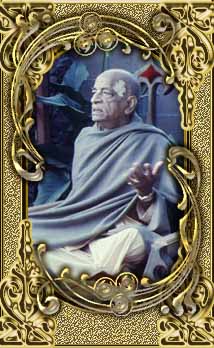