The GBC Resolutions and Zonal Assignments from the 2020 AGM

I am glad you have offered your site as a way to be introduced to the leaders of our movement - who are they, what is their service, how do they think, and how are they practically applying the teachings of Srila Prabhupada to their lives and to the spreading Krishna Consciousness.

Support for this revolutionary legal approach which, in effect, invited claims against ISKCON was the direct result of a worldwide consensus of ISKCON membership, and may accurately be viewed as an unequivocal expression in loving support of all of those children who suffered simply unimaginable abuse.

On Sunday 18th June, the three 40 foot high Rath Carts left Hyde Park on their intrepid journey to Trafalgar Square. In front of each cart was a sea of devotees and pilgrims, swarming the streets and filling the sky with the chanting of the Hare Krishna mantra and the beating of drums.

Even in temple and other religious gatherings I have seldom seen the type of welcome we received. Sri Dangi himself entered our names and particulars in the register, a formality that we always have to do before entering any jail. They have these huge wooden doors and inside is like a vestibule with offices on either side and then another set of huge wooden doors.

Special thanks goes to the Gita Nagari devotees for such a welcome and a wonderful festival. For those of you that have not visited Gita Nagari, it is a special place situated in the middle of a forest in Penssilvania. It is yet another one of those wonderful places that we should be grateful to Srila Prabhupada for giving us for our spiritual inspiration.

Book Distribution of the Future–Today

“I see this taking off everywhere. It’s the future, because many temples now have fewer temple devotees but more congregational members. This encourages the masses to participate. Even those who can’t go out for book distribution directly can help by offering service or donating Laxmi for the cause.”

Then what we had been waiting for all week began: the carts began to roll. Everyone, even onlookers, started moving in response to the parade's movement, which initially was slow, like jets entering a runway one by one. The anticipation we had all been feeling reached a climax.

June 18, disappearance day of H.H. Bhakti Tirtha Swami. "What concerns me is that we want to be more mindful in everything that we do so that everything we are doing is an offering to Krsna or it's a prayer."

By Gopal and Sally Agarwal

So all of you have been using your brains, having meetings, have been trying different strategies and also praying individually, but may be now it is time that everyone all together go to Srila Prabhupada with him as your leader and approach Lord Sri Krishna and let Him guide you. It may sound impractical but it is not.

Dear ISKCON members, Please accept my most humble obeisances. All Glories to Srila Prabhupada. I want to thank those who working to help the situation ISKCON is facing in Kazakhstan. Please find at the end of this letter, excerpts from some of the messages I’ve received from various parts of the world.

I'm living in india and don't have experience in temples in the west, or far away from india, with large indian communities. My "knowledge" comes from other devotees' reports, which means i can't be very sure of what i'm going to say - i'm ready to be corrected by others who know more, but i'm feeling pretty strong about this topic.

Kuli Mela 2006 – A festival of love and healing

Here in New Vrindavan we have 500 plus Gurukulis from all over the world gathered for an unprecended event. It started wednesday 14th June and will finish on sunday 18th. They have come with a mood of wanting to help us make a difference in our society.

It gives us great pleasure to announce the date for Sri Sri Jagannath Ratha-Yatra in Ludhiana. It will take place on Saturday the 7th Oct.2006 and Hare Krsna Mahotsav on Sunday the 8th Oct.2006.

The result is a watered down Iskcon. This is commonly known as the hinduization of Iskcon. The USA and the UK have adopted this approach with success but at a cost.

Prefix “H.G.” to their OWN name

But since I am on this topic, don't you think it a touch pompous for a devotee to add the prefix "H.G." to their OWN name?

Just a reminder that the ISKCON European Convention in Radhadesh will be taking place soon. Details of seminars are given below. We are looking forward to seeing you here at Radhadesh and having your association.

This Retreat will provide the participants with a wonderful opportunity to have fun making friends with other teenagers from Srila Prabhupada's international godfamily. At the same time it will also be an unforgettable spiritual experience - bhajans, kirtans, the association of inspiring senior devotees.

My basic point is this: as Vaishnavas, we should feel great compassion for every sincere soul who is struggling to become Krishna conscious in this very difficult age. I have no doubt that there are sincere souls, with real devotion to Krishna, who cannot completely avoid homosexuality. 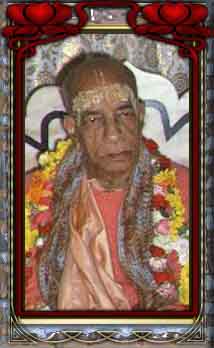