Making all the world my temple 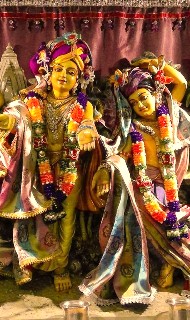 Some time ago, when listening to Srila A. C. Bhaktivedanta Prabhupada sing Chintamani... I was struck with the thought of how the Holy Name is a Deity which he was bathing with the Devotion of his Singing. From that day on I strove in my own meager way to make the Holy Name(and the Vaishnavas) my Deity and all the world my temple. When I see all the countless suffering, sad and dying people in the world as exemplified by a simple trip to the supermarket, I whisper H...

Our Progress in Life is Gauged by Our Chanting

As we all know from various understandings of Kṛṣṇa consciousness philosophy, our life is going to move just like this also. Sometimes when we realize how quickly our life is passing by, we begin to analyze: “Where am I going?” These are good thoughts, “Where am I going? What direction am I moving towards?”, because as we know, everybody by nature has to have some goal, some aspiration in life. Sometimes we get caught up in immediate goals, and sometime... 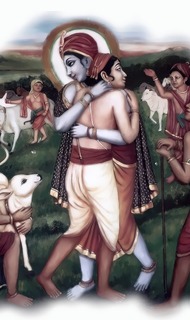 What makes Bg. 2.40 so encouraging is that Krishna recognizes our difficulty. He both prescribes a gradual path and presents us with information about the tremendous benefit that can accrue to us if we simply endeavor to practice devotion. Srila Prabhupada has stated that if someone would just read one page from his books or taste even a morsel of prasadam, he could be liberated. Similarly, even a little devotion can protect you from falling down into a lower species of life. Such devotion never suffers loss or diminution. Srila Prabhupada writes: Any work b... 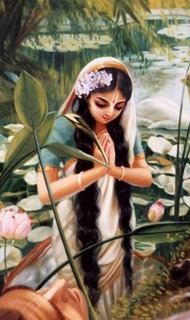 Kamsa was thinking: "Simply hearing Krsna's name causes my heart to tremble. By some trick, by some clever plan, He must be killed. Already I have tried plan after plan, each one more clever than the last, but all have failed. They were useless." As he thought in this way, Kamsa walked out of the palace with one of his spies and asked him, "According to what you have seen, whom does Krsna love the most?" The spy reported, "Lord, I think Krsna is most filled with love for His calves." Kamsa then ordered, "Now return to your home." Kamsa then turned to another attendant: "S...

The Science of Association 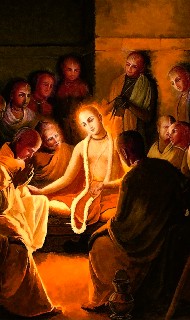 Srila Prabhupada often referred to bhakti-yoga as “the science of Krishna consciousness.” This was not his attempt to falsely confer a sense of empirical cachet upon a spiritual process, an area of knowledge that is, in the West anyway, largely considered to be too nebulous to warrant such distinction. Prabhupada was well aware of the antagonism that scientific circles sometimes have for their spiritual counterparts, as well as the condescension with which western societies frequently treat rel... Most resolutions take the form of “do’s”—things I resolve to do—and “don’ts”—things I resolve to not do. And Vedic wisdom tells us that all do’s and don’ts should support one main do—always remember Krishna (God)—and one main don’t—never forget Him. So for our New Year’s resolutions, we can resolve to increase our chanting of the Hare Krishna mantra, especially on beads, and our reading of Srila Prabhupada’s books. And we can resolve to decrease, or stop, activities detrimental to Krishna consciousness. And in our efforts, the Lord will help us, for God helps... How to Change this Year? You Need to Freak Out! Our cultural conditioning tells us we should make resolutions for the new year. Of course, the perennial problem is that most of us haven't followed through on our previous year's resolutions. And it can even get depressing to think about how many times this has happened. So maybe it is better we don't make any resolutions this year. This way we'll have nothing to lament about in early February when we haven't followed through. Well, actually I think it's a better idea to understand why we don't follow through on our resolutio... 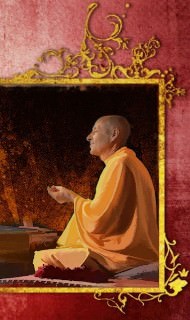 In this age of Kali, there are two deadly enemies that are always about to devour all the sanctity of our spiritual lives: egoism and lethargy. Krsna tells us in Bhagavad Gita that we must give up egoism and lethargy. Wherever the false ego becomes prominent, we start thinking in terms of I and mine. Then there is no service attitude. We want to be master. We want to be enjoyer. We even see other Vaishnavas, even our old godbrothers and godsisters as competitors rather than worshipable Lords. We should see every Vaishnava with veneration. They should be objects of our w... A look at what the Srimad-Bhagavatam has to say about time, a concept that has challenged philosophers for centuries. Time is a little difficult to define. Philosophers and theologians have tried for at least twenty-five centuries. Albert Einstein remarked, in the midst of slightly more esoteric statements regarding physics, that time was what his wristwatch measured. St. Augustine said that he knew what time was as long as no one asked him to explain it. And sounding a note of frustration in her book What, Then, Is Time (the title too is ... Driving an automobile in the service of the Lord (dasyam) is equal to performing any other service in bhakti-yoga such as sravanam, kirtanam, distributing books, offering arati to the deities, managing a temple, etc. Sri Daruka, Sri Hanuman, Sri Garuda and other devotees are famous for rendering the service of transporting the Lord from one place to another. Srila Prabhupada wanted devotees to drive carefully and he censured careless driving on several occasions. If we ignore his request and the laws governing safe driving, we are spiritually and materially at faul...

Museum of The Hare Krishna Movement? 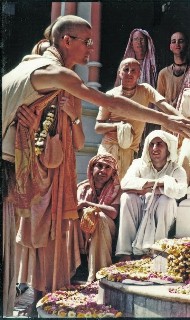 Those of us who appreciate the magical potency of what Srila Prabhupada gave us know that a miracle of colossal historic importance occurred in the late 1960’s. At that time His Divine Grace came and ignited a worldwide spiritual revolution that has no historic equivalent. Those of us who were blessed to become his disciples all got an opportunity to be part of this extraordinary moment in history. Yet time is gnawing away at all of us every day. One by one we...

Message from the TOVP Chairman – A 2019 Overview and Beyond

2019 has been another wonderful year for the TOVP. And next year will mark another milestone on the march to the 2022 opening. On February 13, 2020, we will be inaugurating the Pujari Floor of the TOVP. It is the largest pujari space on the planet measuring over 100,000 square feet with over 20 specially designed rooms! We have been able to get to this occasion by the diligent support of all of you, as well as with the professional management expertise of our Project Management Consultancy, Cushman & Wakefield. Many ISKCON leaders have also put themselves out to help the TOVP in the final str...

The ISKCON Leadership Sanga 2020 is almost here – only two months to away! Have you enrolled yet? Don’t worry there is still time to register for this wonderful event. ILS 2020 promises to be the largest gathering of ISKCON leaders to date. Five hundred devotees attended ILS in 2012 and the numbers have been steadily increasing. This will be our 5th ILS gathering, and we are anticipating 1,500 leading devotees from all over the world.

Some interesting thoughts from a friend of 40 years ago 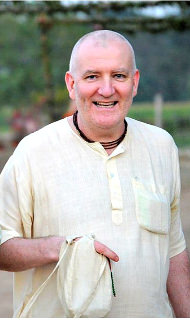 While we may consider the Hare Krishnas a rather obscure group, the truth is their impact on the world we occupy in 2018 is massive. They are the ones who originally brought the likes of meditation, mindfulness and good diet to us all. So while it may generally be thought that the Hare Krishna movement has not taken the world by storm and achieved mass global domination, secretly their core teaching and activities have. This is shown wherever you look in society now, where you will witness Hare Krishna-isms everywhere, even if they might be a little on the diluted side. In...

The Life of a Text: Bhagavad-gita Through the Centuries 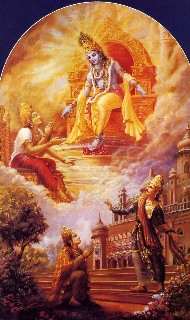 Although many articles have been written about the Gita as a philosophical poem, exploring its meaning and theological implications, and although both devotees and nondevotees have written elaborate studies of Srila Prabhupada's translation, few articles deal with the text as a historical phenomenon, something that came to us after a long journey of commentary and explication. In the very beginning of the Gita's fourth chapter, the text itself provides its own explana... 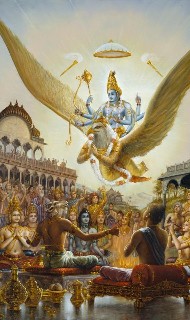 When we talk about the planet's earliest civilization, we are talking about the world's earliest sophisticated society after the last ice age. This means that according to the Vedic time tables, various forms of civilization have been existing for millions of years

History of The Palace of Gold 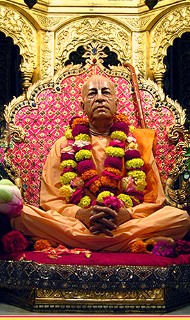 The Palace of Gold is the first samadhi of Srila Prabhupada in the world, although originally it was not intended to be his samadhi. The devotees had intended to construct a simple residence in a peaceful, undisturbed environment where Srila Prabhupada could fulfill his life goal of translating and commenting on the entire Srimad Bhagavatam. As time went on, however, the residence became more ornate and came to be known as “The Palace of Gold,” which is very appropriate because golden is the ... ISKCON Communications Director and Governing Body Chairman Anuttama dasa offered his thoughts on lessons Vaishnavas can gain from the Christmas season during a Sunday Feast lecture at the Washington DC Temple. Is there something to gain from contemplating the sacrifices of Lord Jesus Christ...and plastic reindeer?

Sharing the Spirit of Christmas "Sharing that's the heart of Christmas!" chimes Better Homes and Gardens. "To celebrate, people share traditions from gift-giving to party-going with family, friends, and acquaintances too. And food plays a special part in these yuletide activities. Christmas just wouldn't be Christmas without the aroma of the festive bird and baked goods wafting through the kitchen! … Once the sharing begins, and you've sampled our treats, you'll realize that fellowship and food go hand in hand in making your holidays memorable."

How to really be happy this Christmas 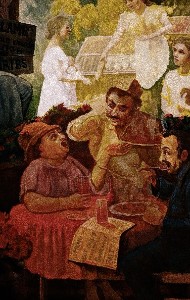 The Vedas therefore enjoin that this is the first and most important lesson. “Now you have a human life you must inquire into the absolute.” Ask the big questions. Who am I? Why am I here? Where do I go when I die? At least we should dedicate some of our time to seriously investigating these areas of major importance. But what school does that? Rather we are encouraged to work very hard to improve our material living conditions. Get a better job. Earn more money. Live in a nice house wi... 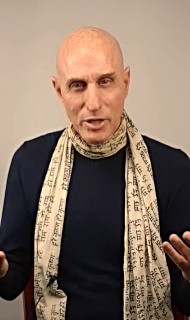 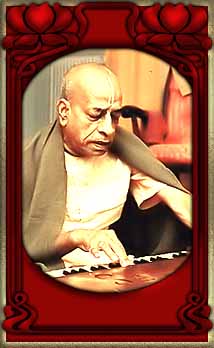