Historical event for Rome: Ratha-yatra in the center of Italy’s capital for the first time! 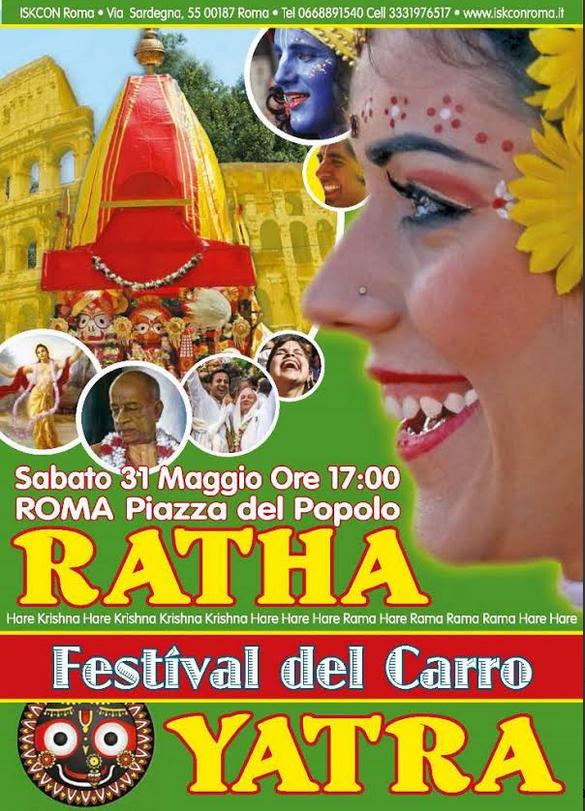 The official permission for the Ratha -yatra in Rome has just arrived! (Saturday, May 31)

It ‘s the first Ratha Yatra Iskcon Italy is allowed to perform in Rome! This is a momentous event for the whole yatra. Srila Prabhupada was in Rome during the same date in which we will celebrate this big festival.

Surely is not something you will want to miss!

It could be your perfect summer vacation combination with the Bhakti festival at Villa Vrindavana (June 6-8).

The route approved for the festival, Via del Corso, right in the prestigious center of the city, has never been assigned to any event , even famous mundane events! Lord Krishna surely used His powerful yoga-maya energy to all those who were to grant the various permissions, and finally it’s done!

This victory is mainly due to Mukundananda prabhu’s long and persistent endeavor for such unique, difficult and sensational devotional service. He did not sleep in the last 3/4 days, only his determination and ability have allowed this historic milestone. The inspector of the police is said to have increased his weight by 5 kg, by dint of eating all these cakes and laddu sweets expertly administrated by Mukundananda prabhu.

Dear devotees and friends, please take note that the famous Via del Corso of Rome is a very narrow street, the acoustics are tremendous, so the holy names will resound in a such sublime and powerful way that all the demigods surely will be attracted and will want to be present as well.

By the way, the Ratha-yatra will be done in the same place, where about 30 years ago an other “significant” event took place.
The Hare Krishna devotees, while performing Harinama, were attacked by a group of anarchists and one of them, myself, was shot down on the floor with a karate kick and suffered temporary amnesia. For me this is an amazing “rematch” and I am really pleased , happy and satisfied.