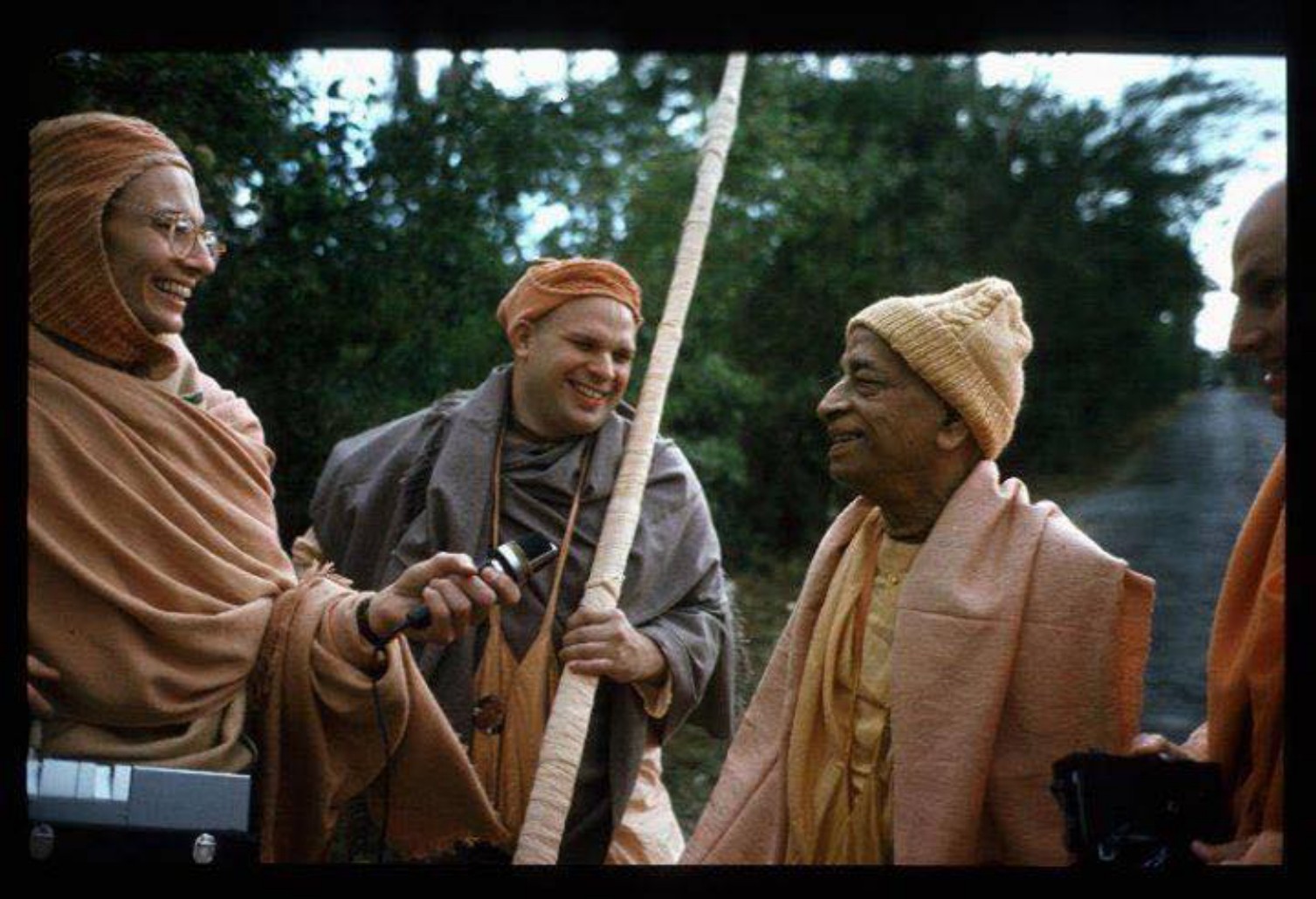 Please accept my most humble obeisances. All glories to our beloved Srila Prabhupada!

It is with great sadness that I have heard the news of our beloved Godbrother Brahmananda Prabhu. There was a sobbing message on my voicemail, from Kosha Rupa, and the rest of my day was spent in bereavement.

Brahmananda was, is, a very great soul. He loved Srila Prabhupada dearly. He never wanted to usurp his position. He never felt he was an ideal disciple, but his love, his heartfelt love, for Srila Prabhupada was most selfless and unambitious. He never had personal ambitions to be this or that–he just wanted to serve Srila Prabhupada, to assist him in whatever way possible. And also to protect him from harm.

Amazingly, just yesterday I stumbled upon an older BTG article that Brahmananda had written, praising the prayers of Queen Kunti. In the past couple of days, I have just begun reading his book, “Swamiji,” and relishing those memories of early New York 26 Second Avenue. It was such a special time.

My dear friend and Godsister, Kusha devi, sent me Brahmananda’s book, “Swamiji” but I hadn’t had time to really look at it until yesterday. Then, when I opened it, I saw that Brahmananda had written me a note on the first page: In that big scrawling Brahmananda script it said, “For Govinda dasi, Where is YOUR book?” What a surprise! And then this news of his departure!

A Brahmin lady friend once told me that when a person dies, the soul remembers all the persons they knew, and loved, and sometimes they even come to bid them farewell. I would like to think that is true, for I loved Brahmananda the most, of all my Godbrothers, and I still do. His mood of love for our Swamiji was very special, and I also felt a similar mood. We shared a common feeling of love for Srila Prabhupada that I am unable to adequately describe.

I reflect on those sweet times in early 1967, in New York, where we sat around Swamiji’s room every evening, relishing his talks about Krishna–and just about everything under the sun! I recall the times when Swamiji held up the world globe in his hands, and turning it slowly, said confidently, “Brahmananda, you will go to Russia, Goursundar, you will go to Japan, Rayarama, you will go to England…” Our Swamiji had big plans. And our dear Brahmananda was one of those beloved disciples who helped fulfill those plans.

Brahmananda and I shared a similar vision, that is: “Swamiji’s room was the whole world, and he was all the people.” He was our everything. There was never a thought of personal ambition, power, or position–
none of that existed. It was simply not in the realm, that spiritual realm, that we knew as the early days of Swamiji’s Iskcon.

We will miss him. For me, Vrindaban will not be the same. Just going to visit the “brothers” was always a big “must” on every visit. Just to sit and reminisce about Srila Prabhupada, and hear those wonderful stories! I always felt Srila Prabhupada’s presence right there in the room!

Poor Gargamuni, he must be devastated.

But I also know that in some of my last visits with them, Brahmananda’s mood was one of anxiously waiting to go to be with Srila Prabhupada, and to serve him wherever he was. The separation was becoming more and more painful: Brahmananda missed him, and just wanted to be with him again!

Brahmananda was indeed a “one of a kind devotee.” His surrender and unconditional love for Srila Prabhupada was exemplary. There is no need of empty praise here. He was truly a soul dedicated to his Spiritual Master Srila Prabhupada, and one who had zero desire for personal name, fame, and fortune, and all the baggage that comes with it. His only thought was how to please Srila Prabhupada, and that sunshine smile was his coveted reward. He was satisfied with that, as he knew the true value of pleasing the Acharya, and he knew how to do it.

His mood was one with Srila Prabhupada’s. He wanted to share Krishna consciousness with everyone, to make it available to every soul, and not to make it a business to gain money or fame. Though he and his brother, Gargamuni Prabhu, were naturally talented in business, he chose Prabhupada’s mood of scattering the seeds of Krishna consciousness worldwide. When the American division was charging $600 for a Vedabase of Prabhupada’s teachings, Brahmananda was charging $20–with only $3 or $4 dollars profit margin to keep his little business running.

True to his commitment to Srila Prabhupada, he continued to make the teachings available and affordable to everyone–even when the American

BBT sued him, and even when he was banned from entering Vrindaban’s Krishna Balarama Mandir, the temple of his beloved Master! Still, he continued to do what Srila Prabhupada wanted, to make the teachings of Krishna consciousness available to everyone. For this also he is to be seen as a hero, one that remained faithful to Prabhupada in spite of the passing whims of politics.

Even if there sometimes appears to be mistakes or deviations in the lifetime of such great devotees, I personally believe these should be viewed as instructional, for all those who come later. We learn from the lives of such dedicated devotees, and we also receive their blessings.

From his newly published book, “Swamiji,” I am now coming to learn more about Brahmananda’s “pre-Prabhupada” history. And it is giving me even a greater appreciation for him. He was definitely one of those selected souls sent to help Srila Prabhupada.

Srila Prabhupada used to say to us, back in 1967 and 1968, “My Guru Maharaja has sent you all to help me!” Indeed, these early disciples must have had previous relationships with Srila Prabhupada, for as soon as we met him, practically all of us, we knew he was the person we had been waiting for all our lives! Though we were very young, we were hungry for truth, and it seemed like eons that we had been waiting for him. So we just jumped right in, and began to love him and serve him anyway we could. We loved him immediately.

There was no question in Brahmananda’s mind that Srila Prabhupada was his eternal guru. Most of the other early devotees felt the same way. We knew, from the moment we met him. And even though there were ups and downs, due to the struggles within the material world and modes of nature, throughout it all, we never quit knowing this. We always knew, Srila Prabhupada is our sat guru, our eternal Acharya, and he is everything to us.

Recently I heard one leader quoted as saying, “these early disciples of Srila Prabhupada, they were drug-crazed hippies!” How wrong! (And how offensive–both to Srila Prabhupada as well as to his dedicated disciples!) This person probably doesn’t know because he wasn’t there! He came some time later, and does not really understand. There were, of course, hippies in the 60’s, for certain, but the core group of devotees who came to Srila Prabhupada early on could be better described as seekers, spiritual seekers.

They grew up in the 1950’s, in post-war America, a time of peacetime affluence. Every American home had amenities that were unknown in third-world countries–things like piped in hot and cold running water, indoor bathrooms, electric stoves and heaters and fancy kitchens, television sets, and cars–most families had at least one car, usually two. Many of these youths were even gifted a car at high school graduation! Most had college degrees, and jobs available to them; some even had master’s degrees and teaching positions, as most of them came from affluent families.

In spite of this, they were dissatisfied with all the material world had to offer, and were simply searching for truth, for some deeper meaning of life, and for their actual place in the universe. They were frustrated with their modern education and the materialistic society they grew up in. They were not satisfied with all the comforts of life that came so easily to them, simply by their birth in America. If one is a beggar, he has nothing to renounce. These youths were not beggars. They were not “drug-crazed hippies.” This is a misnomer. These young disciples were serious spiritual seekers, and Swamiji, later known as Srila Prabhpada, fulfilled their quest for truth, and more.

Some of them even traveled to Europe or India in search of truth. Brahmananda traveled to India in search of his guru, some time before ever meeting Swamiji in New York. Hayagriva, already a college professor, also went to India on such a search. Both met Swamiji in New York. This search for meaning was common to all of Srila Prabhupada’s early disciples. They were, as Srila Prabhupada used to say, “sent by my Guru Maharaja to help me.”

This fact should always be remembered and such derogatory attitudes, calling them “drug-crazed hippies,” should be wiped from the memory of Iskcon. Srila Prabhupada dearly loved his early disciples such as Brahmananda, as well as all the others. He sometimes spoke of the sweetness of “those early days in New York.”

These early disciples, like Brahmananda, gave everything, and took nothing. They gave their lives in support of their Swamiji’s movement. There was not even the temptation of name and fame and money and position at that time. None of that was existent in the very beginning. Some were tempted later on, but not disciples like Brahmananda. Brahmananda was in a class of his own; he always kept Srila Prabhupada as his topmost hero, and never tried to become the hero himself. And that fact has made him the greatest hero!

Brahmananda always thought of Srila Prabhupada, day and night, and contemplated how to please him. So let us somehow follow in the footsteps of such a great soul, and never forget his example. This is the essence of the path of Bhakti.

I am so very glad that Brahmananda was able to leave this world in the Holy Dhama. That’s what he wanted. And that is what Srila Prabhupada wanted. May we all become so fortunate!

To do this, they will have to look to the service mood of such great souls as Brahmananda, for he served Srila Prabhupada with loving devotion, free from the poison of pratistha and pride. And in this way, that original beauty of Krishna Consciousness that filled Srila Prabhupada’s early Iskcon will again become prominent in the minds and hearts of devotees all over the world. That will be the glorious revival of Lord Chaitanya’s movement, the saving grace of Kali Yuga.

One Response to “Tribute to Brahmananda Prabhu from Govinda dasi”