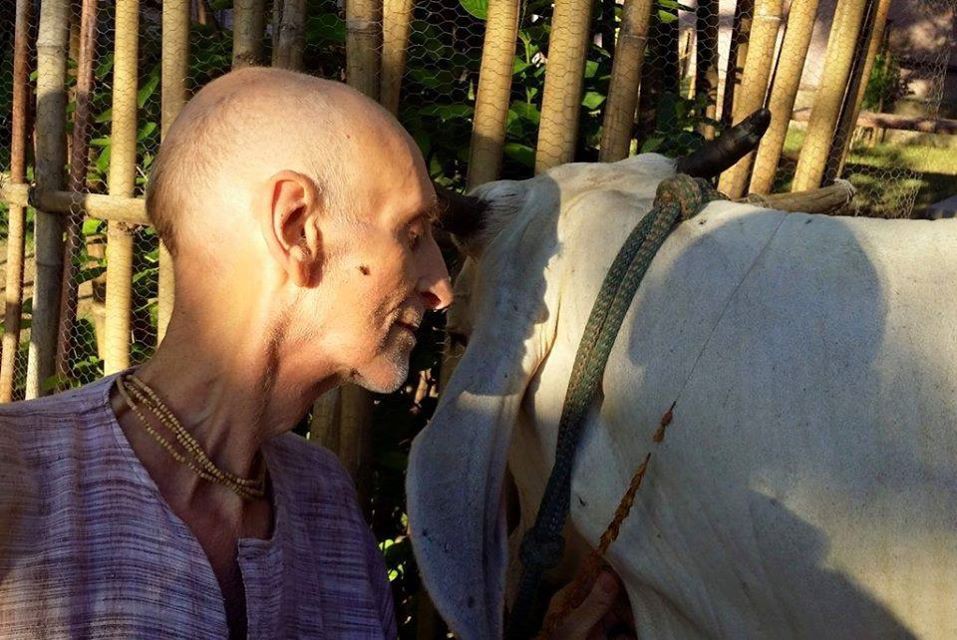 I am now in Bangladesh, surrounded by lush green trees; I just finished prasad this morning and was relaxing, when suddenly I was informed by Madhavendu das of ISKCON Vrindavan the news. I was shocked to hear that Prabhupada’s beloved is not here anymore.

I used to see him time to time when travelling around. I have deep affection for him because he rendered a tremendous amount of service to Srila Prabhupada. In two of Srila Prabhupada’s most ambitious projects: ISKCON Vrindavan and Juhu, he played a key role as architect and leading manager as well as recently in our temple in Punjabi Bagh, as well as Siliguri and Ahmedabad as I have been told.

One day we were in Mayapur, many years back, desiring to have his association I requested him to have a glass of fruit juice with me. During our conversation we spoke about several things. I conveyed my feelings of appreciation in how he helped in establishing a wonderful temple: Punjabi Bagh. Out of his humility, he replied, “Yes, yes but a very small temple though.” I told him that it doesn’t matter; he helps maintain it and guides the devotees there through the expert medium of HG Samba das, thus doing a great service.
I respected his numerous businesses and he was very expert in being able to earn money for the sake of preaching Krishna Consciousness through all available means.

I wish I could have had more of his association. He performed abundant service to Prabhupada, our society and devotees in general, selfless service. He dedicated his own life to serve the pure devotee Srila Prabhupada and for the cause of Krishna Consciousness. His life is exemplary being dedicated to spread Krishna consciousness. He will stand as an inspiration for devotees all over the world for generations to come and set an example how to dedicate their lives for the propagation of Krishna Consciousness. Just assisting in building our Juhu temple is in itself magnificent preaching. Distinguished VIPs visit regularly. One such person was President Clinton’s sister. She came many years back incognito to India, especially Bombay and stayed for some time in the temple. She was inquisitive as to why so many young American boys and girls join our ISKCON society, so she decided to have a personal experience of temple life.

I heard that HG Tulsyan Prabhu gave him the responsibility to help in the construction of the Asta-sakhis at ISKCON Mayapur. Prabhupada gave him a short time in which to finish the construction of both Juhu and Vrindavan temples, and Prabhupada was seemingly angry when reports were not up to the required standard. We understand however that the chastisement of the spiritual master is actually a blessing and by this we can make advancement.

To conclude, Prabhupada glorified the Krishna Balaram Mandir in Vrindavan as the most beautiful temple in Vrindavan: wonderful deities, a wonderful guest house and a wonderful gurukula. Surabhi Prabhu played a great role in helping establish it, so accordingly the Lord will also give him the proper reward. So we feel a great loss, but at the same time we rejoice that he must be getting the blessings of Prabhupada and going Back Home, Back to Godhead. By the arrangement of Krishna and also of Providence, he returned to Vrindavan to leave his body. Living in Vrindavan and dying in Vrindavan will entail the same result and therefore he will be eternally in the spiritual world.
HG Surabhi Prabhu ki Jay
Srila Prabhupada ki Jay!
(transcribed by Bhakta Nikhil)

A Brief View of the Life of Bhaktisvarupa Damodara Swami