Some information on the author of “Sri Kevalastakam” 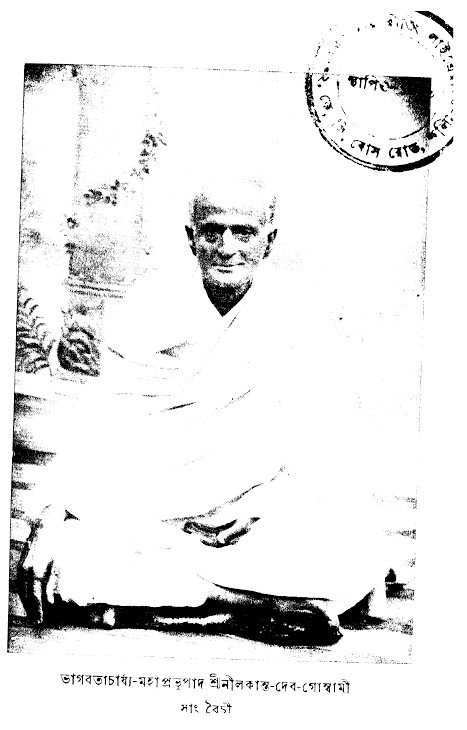 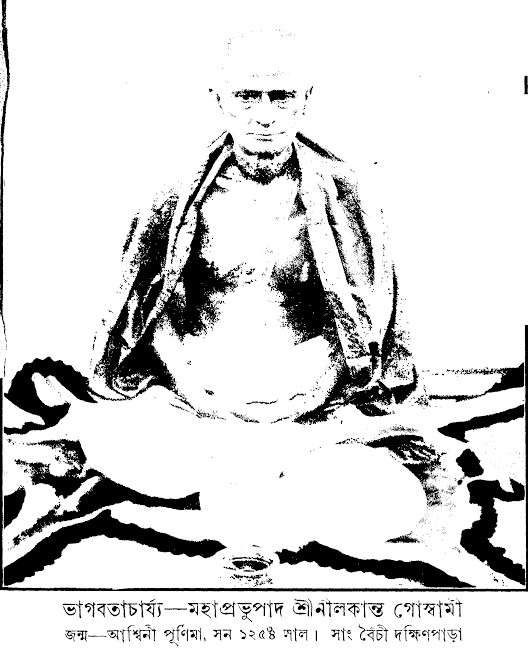 There is a Sanskrit poem describing the glories of the holy name which is quite well-known in ISKCON by the name “Sri Kevalastakam”. Each verse of the poem ends with “harer namaiva kevalam” (“Only the holy name of Lord Hari”). It appears in the songbook called “More Songs of the Vaisnava Acaryas”. Its authorship has been a mystery and it was described as “An Anonymous Sanskrit Poem”. Recently, while reading one of the old “Sajjana-tosani” magazines published by Srila Bhaktivinoda Thakura in the late 19th century, I came across one interesting item, where the Thakura reviews this very poem:

“We have received a small booklet entitled “Nama-kaivalya-sataka”, composed by Sriyuta Prabhu Nilakanta Gosvami. Each verse of the book ends with the line “harer namaiva kevalam”. To reveal the glories of the holy name in this way is the utmost duty of the descendants of the Lord. The composition is excellent. The mood is beautiful everywhere. The glories of the holy name are described in detail. If Prabhupada [Nilakanta Gosvami] could also explain the meaning of every sloka in the Bengali verse under it, it would be a special service to the community of Bengali women. Our tongue always sings the following two verses:

While this review is very favorable, we should not probably altogether forget Srila Bhaktisiddhanta Sarasvati Thakura’s warning as conveyed in the words of “The Harmonist”: “In the days of Thakur Bhaktivinode the number of devotees professing ‘Suddha bhakti’ in Bengal were very few. His appeals had to be made to the class of ‘Misra bhaktas ‘ and ‘Biddha bhaktas’ among whom he found supporters and sympathisers. The ‘Sajjana-toshani’ of that period did not altogether escape the influence of the views of these supporters. Thakur Bhaktivinode, himself the Pioneer ‘Suddha bhakta’, found it absolutely necessary to tolerate more or less this influence of ‘Misra bhaktas’ and ‘Biddha bhaktas’ within the movement.” (The Harmonist, Vol.25, #1, June 1927). However, “Kaivalya-sataka” seems to represent the glories of the holy name without deviations, which unfortunately were common among the vaisnavas of those times.

So, “Sri Kevalastakam” is not actually an “astakam” (eight verses), but a “Satakam” (a hundred verses). The author is a person named Nilakanta Goswami, who was a descendant of one of the Lord’s associates (since Bhaktivinoda Thakura calls him “prabhu-santana”, it most probably means that he appeared in either Advaita- or Nityananda-vamsa). He was born in 1847 A.D. (Asvini Purnima of the Bengali year 1254) in Boinchi, Dakshinpara, Bengal. He lived in Kolkata but ca. 1901 he left Kolkata for his home in Boichi due to the health issues. In 1913 his disiciple Saurindra-mohan Seal brought him back to Kolkata where Nilakanta Goswami continued working on his book on Rasa-lila. These are the bits of information about him that are available from his books.

Besides these books he also wrote the following (taken from the advertisements in his book “Sri Krsna-lilamrta”):

– Sri Vamsi-vikasa (dealing with the appearance of Srila Vamsivadanananda Thakur. In Sanskrit with Bengali poetic translation);
– Bengali translation of the Kalki-purana;
– Pitr-stotra (a poem in praise of father);
– Abar Gaura (a Bengali poem glorifying Lord Caitanya);
– Satyam eva jayati (100 verses glorifying the truth and truthfulness), published in 1919;
– Pativrata (100 verses in praise of the wife’s faithfulness and chastity (with the examples of the great wives like Sati, Savitri, Sita, Gandhari and others), published in 1919;
– Sri Krsna-rasa-lila (Srimad-Bhagavatam verses with Sridhara Swami’s commentary in Sanskrit, Bengali translation and Nilakanta Goswami’s own Bengali commentary), published in 1921;
– Sri Krsna-lilamrta (in Sanskrit), published in 1924.

His publisher and disciple, Surendranath Sadhu, writes in his foreword to “Sri Krsna-rasa-lila” that in the early 1880s Nilakanta Goswami was an acarya of the newly founded “Visva-vaisnava-sabha” in Sarkar Lane, Kolkata. It was the same Visva-vaisnava-sabha that was co-founded by Srila Bhaktivinoda Thakura in the April of 1885. In his articles in the Sajjana-tosani magazine (2nd and 3rd years) Bhaktivinoda Thakur describes the activities of this Visva-vaisnava-sabha, situated in Sarkar Lane, 66, Chorbagan, Kolkata. In one of them (3rd year, #41, p.43) he mentions Nilakanta Goswami as “The acarya of the Sabha who recited the sastra and delivered such a lecture that everyone became happy.” In his books Nilakanta Goswami is also called by his disciple publishers as “Bhagavatacarya” and “Maha-prabhu-pada”.

Our well-known eight verses were selected from different parts of the book:

In the above-mentioned review of the book Bhaktivinoda Thakura quotes the verse #32 (“namaiva paramo yajno”) and #57 (“trni krtya…”).

On the theory of evolution – Science and Religion