Origin of the universe: Srimad Bhagavatam and the Big Bang Theory 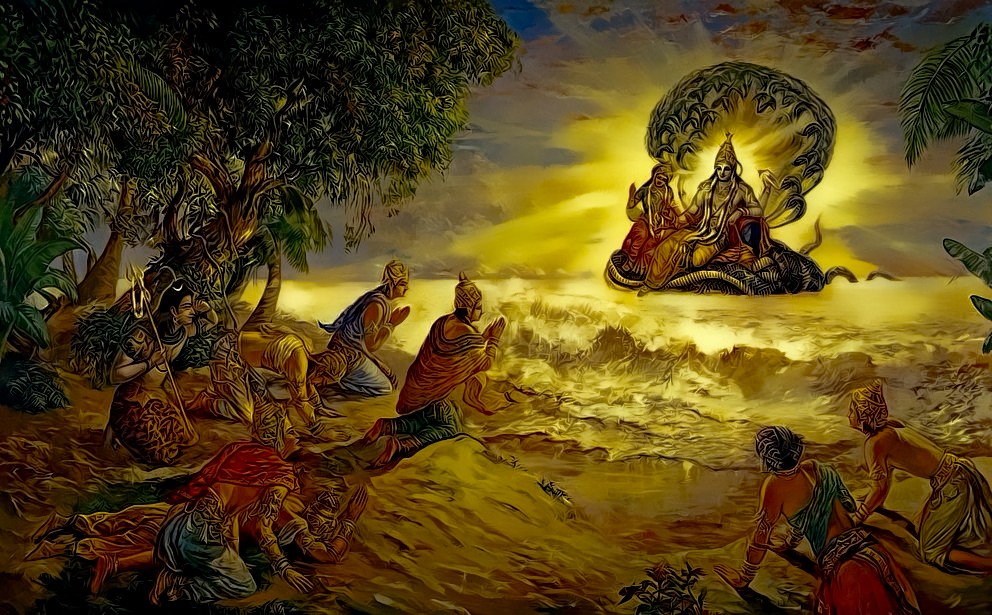 In this article, I compare the origin of universe as described in the Srimad Bhagavatam (SB) and the Big Bang (BB) theory .

According to SB, the initial state of matter immediately previous to its manifestation is called pradhāna (SB 3.26.10p). In the BB theory, this initial state is called the singularity. The table below compares these two states:

The table indicates a clear similarity between these two initial states. Both states, i.e. pradhāna and singularity, refer to a condition where no matter/space is manifested. Since, not even space is manifested, it is just an infinitely small point. SB describes it as void. Although no manifestation of matter/space, yet the total matter is contained and densely packed therein. It is a state where all physical laws break and thus beyond our ability to perceive.

According to both SB and BB, the process starts with introduction of time.

Table 2: Time causes the transformation of the initial state into manifested universe.

According to SB, once time is injected, material nature is agitated and thus transformation begins. First, modes of material nature interacts, manifesting subtle and thereafter gross matter. In various sections of SB, the evolution of gross matter is presented consistently, i.e. space –>air –>fire –>water –>earth. The BB also agrees that with time the universe begins to evolve. BB is an empirical theory, based on methodology which deals only with gross matter. I have compared the transformation/evolution of gross matter in both the SB and BB, in the table below:

Table 3: The transformation of matter in time.

Disclaimer : I compiled Table 3 based on my overall & limited understanding of SB. As the SB is very deep and large, there could be details that may either enhance, raise questions or invalidate these comparisons. However the individual details are accurate, and as such, I leave it to the reader’s discretion to make the comparison.

SP did not reject, rather often points out the limitation of the theory. SP’s focus was to establish Lord Krishna as the cause of all cause. For example, in the following lecture, when SP was asked about the “BB explosion”, SP accepted it as “not just a theory but fact”, comparing it to SB, emphasizing on the cause:

“Explosion, yes. So they are seeing that explosion and the chunk, but they cannot explain how the chunk became exploded. …Material energy itself cannot explode. The explosion theory is there… Not theory, fact. But the total material energy, mahat-tattva, when it is glanced over by Mahā-Viṣṇu, then it becomes agitated, and the modes of material nature begins to act. So then these activities are executed by Mahā-Viṣṇu, by His glancing, simply by His glancing… So simply by glancing, He can agitate the material energy, and the creation begins.” Srila Prabhupada, Lecture CC Adi 01.12

Note that, SP’s arguments are in line with the limitations accepted by modern science :

This could be true. But the details in SB always remain as facts, independent of the BB.

Material manifestation is taken care by the external energy of the Lord. i.e. material nature :

Bg 9.10 — This material nature, which is one of My energies, is working under My direction, O son of Kuntī, producing all moving and nonmoving beings. Under its rule this manifestation is created and annihilated again and again.

SB 2.10.45 — There is no direct engineering by the Lord for the creation and destruction of the material world. What is described in the Vedas about His direct interference is simply to counteract the idea that material nature is the creator.

I have compiled the origin of universe based on the SB and the BB theory. The BB theory is based on empirical science which could deal only with gross matter. As far as evolution of gross matter is concerned, both SB and the BB appear to be in good agreement. SB gives further information regarding subtle elements, consciousness as well as the supreme cause.

The cause for the BB is admitted as unknown by today’s science. Moreover, scientists believe that the cause must be beyond space and time, outside our experience and due to external agency [2],[4]. At present there are many speculative theories, i.e. quantum fluctuation, big bounce, multiverse, quantum gravity loop, M-theory, God etc. As far as science is concerned, the idea that God caused the BB, is just as speculative as the other theories. From scientific perspective, this idea does not carry any additional weightage, and contains similar pros & cons compared to the other theories.

However, here we find an ancient text, SB – giving knowledge consistent with a modern scientific theory. Note that, this BB theory is less than one century old and it was developed based on complex physics and using high-tech equipments. The state of singularity in BB, which is a prediction Einstein’s theory of general relativity and is beyond the ability of any human mind to grasp –  is strikingly similar to the state of pradhāna as detailed in SB. Doesn’t all these indicate the credibility of SB? Wouldn’t SB be a reasonably valid source to gain knowledge which are beyond the scope of empirical science?

I highly recommend the readers to watch the following short clips:

And read the following verses & purports:

I have provided simple/non-technical references which can be easily understood:

References from SB are given within the article.

2 Responses to “Origin of the universe: Srimad Bhagavatam and the Big Bang Theory”