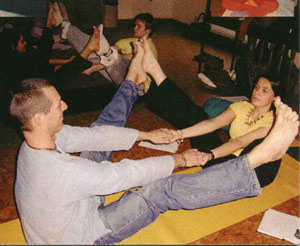 In my previous paper entitled Yoga Mart I explain fifteen reasons why I am of the opinion that the recent upsurge in gymnastic and meditational yoga-related courses being offered within ISKCON, for the most part, compromises the mission of the organization. The eighth item was: “Such courses facilitate inappropriate intermingling of males and females.” Inappropriate intermingling will be the subject of this paper. All the photographs pictured in this paper are taken from promotional material by one of the hatha-yoga-related courses being offered at ISKCON temples today. Since many of those persons pictured in the photographs are devotees, such courses seem counterproductive to the instructions of the founder-acarya of the movement. 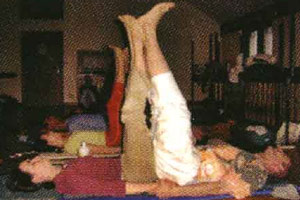 He was well trained as a brāhmaṇa, but one day while he was coming home with the ingredients of worshiping the Deity, he saw one śūdra embracing another śūdra girl, embracing, kissing, because they have no shame. No brāhmaṇa, kṣatriya, vaiśya will do that. It is not etiquette. But because a śūdra, now it is everywhere we can see, embracing, kissing, open to everyone. So young man, seeing this, how he can restrain, check his lusty desire? It is not possible. Kali-yuga is so fallen. If a young man sees another young man he’s enjoying with another young girl, then naturally his lusty desires increases. So these things are forbidden therefore. Still in some places it is forbidden that you cannot… India this is strictly forbidden. There is no such thing in the public street a young man can embrace or kiss. No. That is not possible. Then it will be criminal. Neither a young boy can dare to speak with another young girl on the street. Still it is criminal. She’ll begin immediately protest that is incivility.
So the whole civilization is how to restrict this sex desire. Because… Why restriction? Because the sex desire, sex life, will keep him within this material world in different bodies, either as human being or as animal or as bird or as insect—so long there will be this sex desire. To become free, to become liberated means to become liberated from sex desire. That’s all. This is the basic principle. Not that this tantra-yoga, how to increase sex desires. This is not civilization. (Śrīmad-Bhāgavatam 6.1.26 — Honolulu, May 26, 1976) 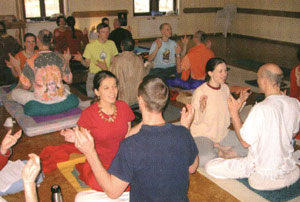 Not that you can do whatever nonsense you like and you have become a yogi. This bluff is going on. The yoga system—first yoga indriya-saṁyamaḥ, to control the senses. And now it is going on, transcendental meditation, Maharishi that “After practicing yoga you will increase your sex power.” This is going on. And that is accepted as yoga, and they are paying for it, thousands, yes. This is going on. Yoga-indriya… Just the opposite. People want sense gratification. If somebody encourages, “Yes, you take this mantra and you’ll be very powerful sex enjoyer,” so people will pay for that: “Yes, give me that.” This rascaldom is going on. You see? So what we can do? We can simply explain, but people want to be cheated. That is the thing. Satya bole to mare lata(?) There is a Hindi proverb that “If somebody speaks the truth, it is received in loggerhead, and if he speaks lies, all bluffing, then it is relieved and payment is there.” (Lecture by Srila Prabhupada: Śrīmad-Bhāgavatam 6.1.19 — Honolulu, May 19, 1976) 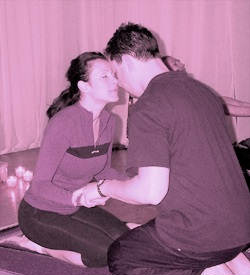 Also, one may become a cheap Vaiṣṇava by trying to chant in a secluded place for material adoration, or one may desire mundane reputation by making compromises with nondevotees concerning one’s philosophy or spiritual life, or one may become a supporter of a hereditary caste system. All these are pitfalls of personal sense gratification. Just to cheat some innocent people, one makes a show of advanced spiritual life and becomes known as a sādhu, mahātmā or religious person. (Caitanya Caritamrta, Madhya 19.160 Purport) 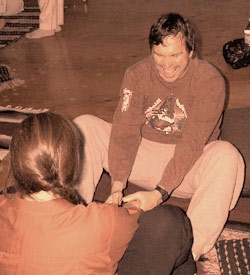 Upon viewing these photographs, I was reminded of a few lines from a Caribbean song of the past called Zombie Jamboree:

Back to back
Belly to belly
At the zombie jamboree.

Bylaws and Centralization - the Facts
A relaxing walk across the country