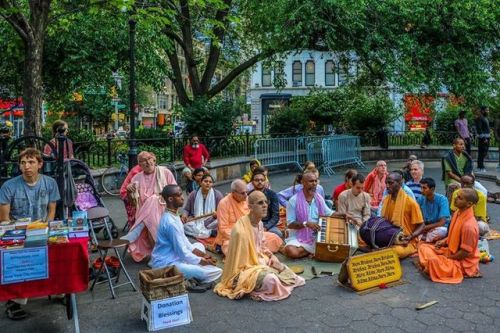 Supporting the Hari-nama Party.
Giriraj Swami: Sri Rama Raya and his Hari-Nama-sankirtana party are faithfully executing Srila Prabhupada’s mission as explained in his letter to authorities in America in 1969: “Our basic mission is to propagate the sankirtana movement (chanting of the holy names of God) all around the world as was recommended by the Lord, Sri Chaitanya Mahaprabhu. People in this age are reluctant very much to understand about God consciousness on account of their unfortunate condition of life. They are working hard day and night simply for sense gratification. But this transcendental vibration of sankirtana will knock at the door of their hearts for spiritual awakening. Therefore, they should be given the chance for this opportunity.
“It is not recommended that a Krishna conscious devotee go into seclusion for chanting by himself and thereby gaining salvation for himself alone. Our duty and religious obligation is to go out into the streets where the people in general, can hear the chanting and see the dancing. We have already seen practically how by this process many, many boys and girls of America and Europe have been saved from the immoral practices of this age and have now dedicated their lives for the service of Krishna.”
To taste and share the nectar of God’s holy names, the devotees of the New York City hari-nama party brave all kinds of weather and surroundings and responses from people; they live in austere conditions and eat the most simple prasada.
These devotees are fulfilling the words of Sarvabhauma Bhattacarya, Lord Chaitanya’s intimate associate, in Susloka-satakam, 62:
yad avadhi hari nama pradur asit prithivyam
tad avadhi khalu loka vaisnavah sarvatas te
tilaka vimala mala nama yuktah pavitrah
hari hari kali madhye evam evam babahuva
“From the moment that the holy names of Krishna became manifest on the earth, Vaishnavas began appearing everywhere. Wearing tilaka and neck beads and equipped with the maha-mantra, they are present in the very midst of the darkest of ages, purifying the atmosphere by chanting ‘Hari! Hari!’ ”
These Hari-Nama devotees are worthy of our full support. If possible, we should join them for chanting, and we can also help by cooking and providing other services, and by contributing financially. To donate, simply go to the Yuga Dharma Ashram website https://www.nycharinam.org/donate and select a donation option (monthly or one-time).
“Lord Sri Caitanya Mahaprabhu is the father and inaugurator of the sankirtana movement. One who worships Him by sacrificing his life, money, intelligence, and words for the sankirtana movement is recognized by the Lord and endowed with His blessings.” (Sri Caitanya-caritamrta, Adi 3.78 purport)
Hare Krishna!
Yours in service,
Giriraj Swami

“I can only take money out from the bank”