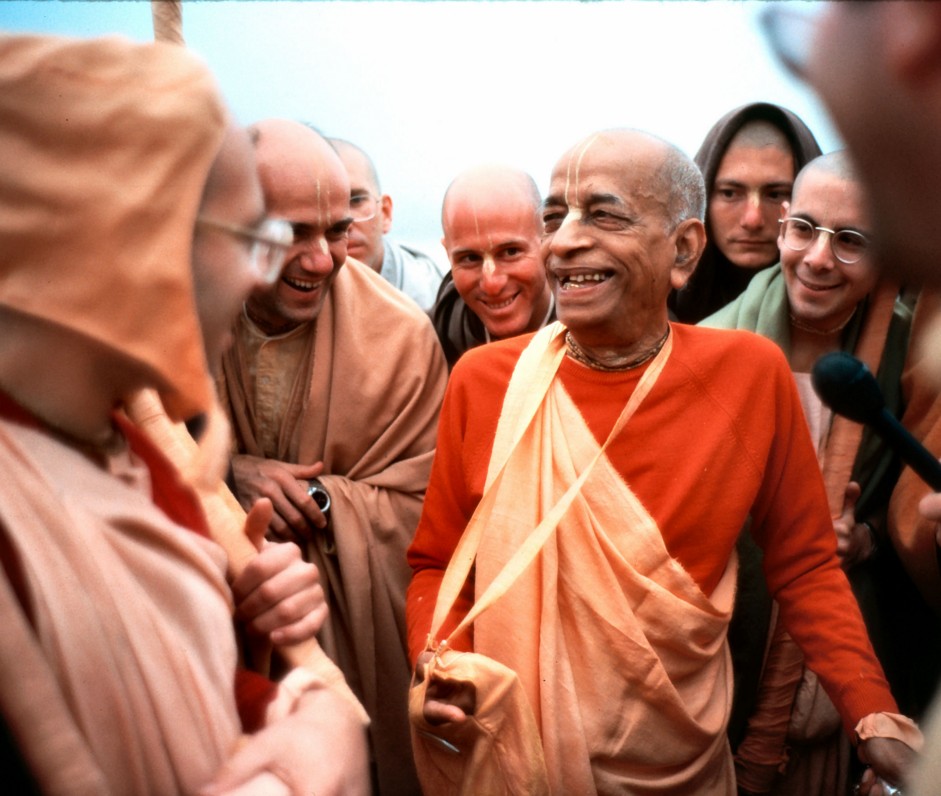 Devotees often ask, “What was Prabhupada like?” I prefer to answer this question by relating what we personally experienced in our hearts in his presence, and how those feelings changed us, uplifted us and inspired us to fully give our youth to him. It is somewhat of challenge to relate how we felt in the presence of a pure devotee, but I hope to give you some glimpse of what it was like to be and serve Srila Prabhupada.

More than what he said, it was the unique experience of his darsana, and how it affected our hearts, that we remember. These are feelings that one can only experience in the presence of a uniquely pure devotee?

Do we, his disciples, even understand how our feelings to fully and freely surrender and give our lives to Srila Prabhupada and Krishna arose in our hearts when we were in his presence? It was mystical. These feelings were antithetical to everything our lives stood for before we met Srilal Prabhupada. Even today, despite our advancement, how difficult it is to find such deep feelings to surrender our body, mind and souls? Prabhupada placed these feelings as gifts in our hearts. They were his, not ours. He needed an army of pure devotees to spread Krishna consciousness, so he gifted us the mood of pure devotion practically from the day we joined the temple.

How do we describe the special bliss we felt sleeping in a crowded van, showering on the side of the road, eating granola for breakfast, lunch and dinner, and being on the streets 12 hours a day? How do we explain that we felt Prabhupada with us at every moment and felt immense reciprocation with every book that went out, despite the intense austerities of long hours, insufficient rest and prasadam, and tolerating extreme heat or cold? Yet we felt more intoxicated distributing his books than we did when we were taking drugs just a few months before! And the intoxication was so strong that we didn’t want to stay back – and sometimes couldn’t stay back.

How do we describe what it felt like to be in a kirtan with Srila Prabhupada, watching his eyes beam and his ever so special smile grace his face when we started to dance, and how it seemed he lifted us off the ground with the bobbing of his head and the gestures of his hand? How do we describe what we were feeling when we madly screamed out in ecstasy, “Jaya Srila Prabhupada!” uncontrollable jumping in the air while realizing it doesn’t get better than this!

How do we describe what we experienced when we hadn’t seen Srila Prabhupada for a year and we got a first glimpse of his divine presence entering the airport terminal? We became overwhelmed, speechless and out of our minds to see his radiant form glide through the airport, his feet seemingly never touching the ground, and the terminal transformed into the spiritual world. Just a glance of his effulgent presence at the airport was far more than enough to fully energize and inspire our bhakti for the entire year!

How do we describe the ecstasy we felt reading a letter to us with the words, “I am very pleased that …” We lived only for his pleasure, and to know that our little efforts were pleasing to him was infinitely more intoxicating than the best psychedelic drugs. To know that our humble efforts could in some way please him was the most satisfying experience of our lives, far greater than any satisfaction that even Lord Brahma or Indra could achieve. Just knowing that he was pleased was an out of the world experience. We lived for this “high.”

How can we describe the transcendental experience, purification, and realization we felt sitting in Srila Prabhupada’s Srimad Bhagavatam classes every morning? His words were like the sun dissipating every inch of mayic fog in our hearts and protecting us from the coming day’s trials and tribulations. Srila Prabhupada’s classes were our GPS to spiritual perfection. With him as our guide we had no worries. His classes were our inspiration, what made us fearless, and what kept us going with relentless enthusiasm. This enthusiasm was so contagious that often guests visiting the temple for the first time would get so caught up in the excitement and bliss that they just stayed and became devotees!

How can we ever describe what it felt like to be on a morning walk with Srila Prabhupada. Prabhupada was like a general explaining how to destroy materialistic civilization. As he described why modern civilization is doomed to fail, faith in the hearts of us 20 year olds became so strong that we were convinced that with Prabhupada as our guide we would soon take over the world! Coming back from those walks we felt increasingly determined and ready to take the world back for Krishna. How was it that such young men had complete faith they could change the face of the planet and were ready to dedicate every ounce of their being for this mission? Were we crazy? Were we delusional? Were we immature, naive, or foolish? Not exactly. If every one of us maintained the same level of faith, purity and commitment we had then, we would be well on the way to creating the revolution in consciousness that Srila Prabhupada came to America to establish.

How can we describe what it was like to be in Srila Prabhupada’s room or garden? His every gesture, movement, and expression was so dramatic and sophisticated that we would be mesmerized by his every move. But beyond this we felt transported to a different dimension of reality: being with Prabhupada was like being seated in the center of the spiritual world. It was an obvious awareness that from this very spot the words that Prabhupada spoke were energizing not only an entire movement, but would be affecting civilization for the next ten thousand years. And we were sitting with the very person who was making this happen right now. We knew that the words he spoke were the only words worth speaking; the only words that made sense, the only words that could enlighten others and could end their suffering. We were with the only person who knew how to solve every problem humanity faced. What an awesome feeling it was to be in that intimate presence!

What was it like to receive a letter from Srila Prabhupada? He encouraged us to continue with our preaching programs and chastised us when we proposed to do something foolish or immature. In doing so he empowered us to continue in the right direction and saved us from ourselves, as we could be quite expert at making wrong choices. It was like having the perfect father, the father who knew everything. It was a feeling of deep security, that we would always be safe, always be properly guided, and that there was nothing to fear. With Prabhupada we knew that any challenge in life could be easily solved, any question answered, any illusion dispelled, and any ignorance defeated. We felt that even though we were fools, we were no longer forced to act foolishly, and that we had become uniquely blessed with wisdom that would distinguish us even from the most “intelligent” people.

Can we ever describe the special feeling of bringing someone to Srila Prabhupada’s lotus feet, a wandering soul looking for shelter from the material pangs, perhaps having already been cheated by a so called guru, or aimlessly looking to find shelter in someone who could actually guide them out of their suffering? How amazing it was for us to offer Srila Prabhupada to such persons, knowing full well that they would never be cheated, that when they met him they would understand what purity meant, and their hearts would change. We were convinced that Prabhupada was the only person they would ever meet who could actually help them. He was our hero. He saved us. And we wanted to share him with everyone because we knew only he could save them and make them happy.

How do we describe the feeling of seeing and being with someone who is unlike anyone we ever met, have ever met, or will ever meet? It is a special feeling that every one of Prabhupada’s disciples had and may never be able to properly communicate those feelings. But one thing we can say for sure is this: whoever comes in contact with Srila Prabhupada in any way – through his words, pictures, videos, or devotees – will never be the same again.

I pray that all of Srila Prabhupada’s followers now and for the next ten thousand years, will be able to feel at least some of what we felt with Srila Prabhupada while serving Srila Prabhupada with their spiritual masters. These feelings will be their greatest treasure, strength and inspiration.