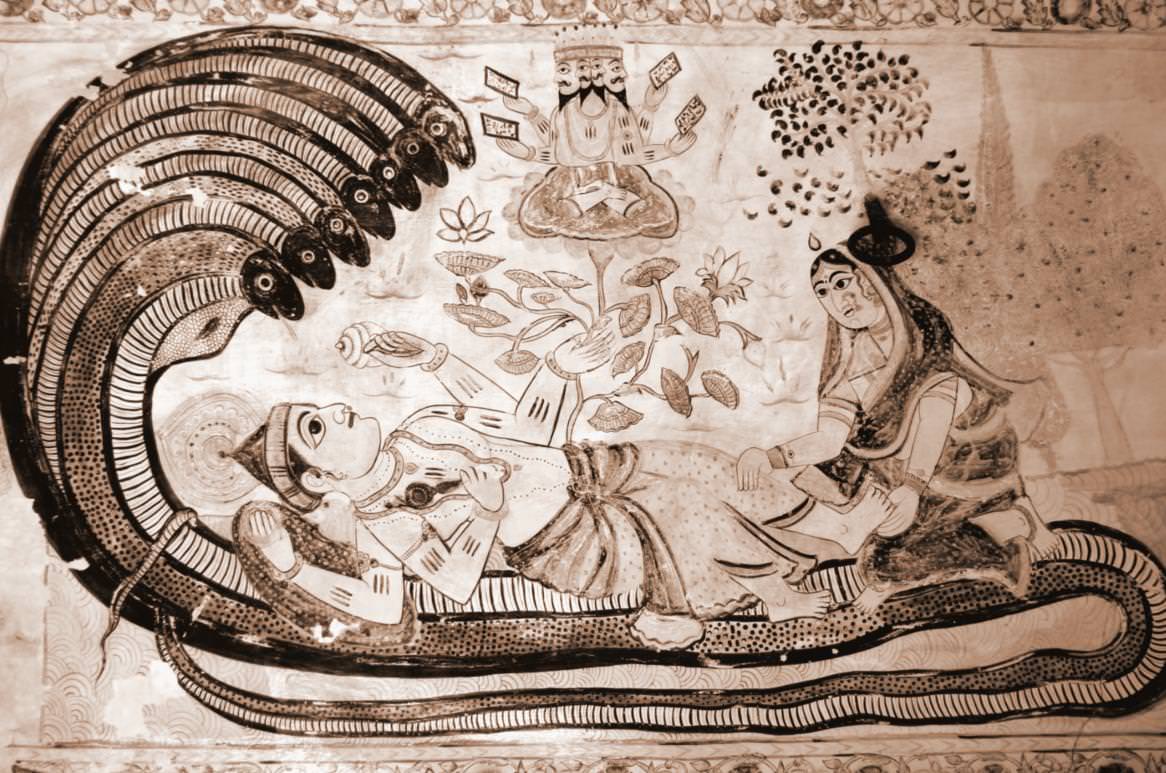 Determination is vital either in material or spiritual life. This determination exhibits a devotee’s hankering and sincere desire for attainment of the perfectional stage of devotional service. Lord Brahma, the original first living being was entrusted with the service of engineering the material world, based on the raw ingredients provided by the Lord, under His direction and empowerment. In the course of his creation, Lord Brahma faced five obstacles, from which we too can derive lessons that pertain to our own practice and execution of devotional service.

Dissatisfaction – When what you want, is not what you get!

Lord Brahma first created the five ajnana-vrittis of elements of nescience, such as self-deception, the sense of death, anger after frustration, the sense of false ownership, and the illusory bodily conception, or forgetfulness of one’s real identity [SB 3.12.2]. After which, the patriarch felt dissatisfied at having to perform the thankless task of further implicating the living entities into ignorance.

Similarly, while serving sometimes we’re given such an engagement where we’re unable to see any future or tangible purpose of the seva. The seva seems so ridiculous, that we become dissatisfied while performing it. For example, menial services of sweeping floor, cleaning bathrooms, serving prasadam, etc. especially done on a routine basis can seem very non-purposeful. We may feel underutilized; our existence not properly justified. Brahma too, found it ridiculous that the elements of nescience were created. Why torture a dying man? Living entities are already conditioned, why make their escape impossible? Is he doing justice to his position as the father of creation?

From worthlessness, he felt the seva to be contradictory. An example would be if a brahmacari were given a seva that involves handling of money or dealings with women. It can be a burden on the mind. How to continue serving, when nothing seems right? Solace comes from having faith in the orders, direction and vision of the bona fide authorities or leaders. Although we may not be able to see the bigger picture, they’re able too. Like an eagle that soars higher above common birds – has a wider vision. The ajnana-vrittis purpose although appearing sinister was necessary for the living entity to enjoy separate from Lord, as is was their desire. The good Lord was simply fulfilling it through the medium of Brahma.

Disobedience – When ‘no’ is not an option!

Being in a position of authority, Brahma was a natural leader for all subsequent created beings. When he employed the four Kumaras to help him in the service of creation, he was met with defiance. They, being attached to a higher cause disliked the idea of being entangled in passionate work. This troubled Brahma, as now he was somewhat obstructed in carrying out his service. At every point of life, we will always have someone superior and subordinate to us. By example, Brahma taught how to continuously be determined while dealing with subordinates who may not share the same level of enthusiasm. Firstly, we must understand the psychophysical nature and abilities of a particular person before and its compatibility with the service before engaging him. The four Kumaras had natures that opposed that of the service of creation; as such it was a recipe for failure.

Service is done in a happy and content mood (su-sukham-kartum-avyayam). It should not be forced upon but inspired by. This dictates the need for different leadership styles when dealing with subordinates of different natures. Everyone has an engagement and as a leader, it’s a responsibility to properly engage a subordinate. Brahma became frustrated, but he was not discouraged. Later, he engaged the four Kumars as leaders of a Vaisnava sampradaya. Also, they travelled the universe by their mystic powers, purifying places of sins, as well as giving enlightenment to all [SB 4.22.2].

Disturbance – When the bad turns ugly!

After being dealt with disobedience, Brahma controlled his anger but it unfortunately manifested as Rudra. Seeking to persevere in his seva regardless of the circumstance, he engaged Rudra in creation. The matter was catastrophic, Brahma was stupefied. Later, Brahma recalled him and promised to summon him only when devastation was necessary.

In our service, so many disturbances come as obstacles and unseen blockages that make us slow down, stop or even go the other way! Preaching is one example. Preaching is always difficult and filled with uncertainty. Nevertheless, disturbances are good because they help us to refocus on the purpose of serving. If everything is going smoothly, there can be a tendency to get caught up in the excitement and forget the purpose of preaching; satisfying Krishna and the Acaryas. When Brahma was faced with such disturbance, he had to stop, think and take shelter of the Lord. He advised Rudra to engage in penance unto the Supreme Lord.

Similarly, we too should take the ‘advantage’ of disturbing situation to stop, think and take shelter of Krishna. Brahma turned lemons into lemonade – making best out of bad bargain. He saw well in a seemingly hopeless situation; how Rudra could be engaged. Similarly, we too have to learn to see the silver lining of every cloud.

Distraction – When something wrong catches your eye!

Simply put, Brahma got momentarily side tracked from his seva by the presence of Vak. While serving Krishna, there are numerous “Vaks” that steal our attention and distract us from our service, sometimes even compromisingly. These could come in the form of women, money, power, position, glamour, possessions or recognition.

Although we may not fall prey to them, the very taught of enjoying these are distractors enough! So, how should we deal with it? As in the case of Brahma, he was brought to his senses by the ‘good guidance’ of his sons, the great sages, who were dismayed at the patriarch’s act of immorality. Similarly, we should mould our lives to always be surrounded by such ‘sages’ that keep watchful eyes on our character. This may sound troublesome, having someone over your shoulder, but if it can save us from danger, then its welcomed trouble.

Factually, its Krishna’s test of our sincerity of purpose and a humbling factor to keep us grounded. As a distracted goalie misses the ball, a dreamy batsman misses the pitch and a preoccupied student misses the lesson; all regret that single moment, we too are humbled in such a wake. Nevertheless, the path leads forward, after the incident; Brahma relinquishes the mentality, reforms and continues his service. We too should continue and not be dissuaded.

Deficiency – When too much is still not enough!

Brahma having created his lot still felt very deficient. The way things were progressing was not up to his mark – not up to his expectations. While serving, we may do our very best, give it all we got, put in every sweat and blood, and yet – it may still fall short of expectation. Firstly, we have to acknowledge that everything and everyone has a saturation point. Everyone has their limits and is limited.

Brahma in spite of manifesting the sages with great potency, all kinds of creations of Vedas, alphabets, music, arts, etc. still did not achieve his desired result. We have to accept this fact, that we as well as others are restricted in our potencies. As such, there should be no unwanted pressure or demands from others or us. This is a vital ending lesson, as sometimes while serving, we can get into the tendency of being a perfectionist. Dotting every ‘i’ and crossing every “t”, as the saying goes. Seva is not about perfection, it’s about love. We do put in our very best, and that shows love, not the relative success or failure what we may perceive.

At such a low points in service, appreciation is more need than ridicule. We should learn to appreciate others (and ourselves) for the effort made and not push for the impossible, which may break an individual’s spirit. This is the secret balance of bending without breaking.

Mahaprabhu’s Victory – Over the Mayavadis at Benares

THE BULL AND THE BHAGAVATA