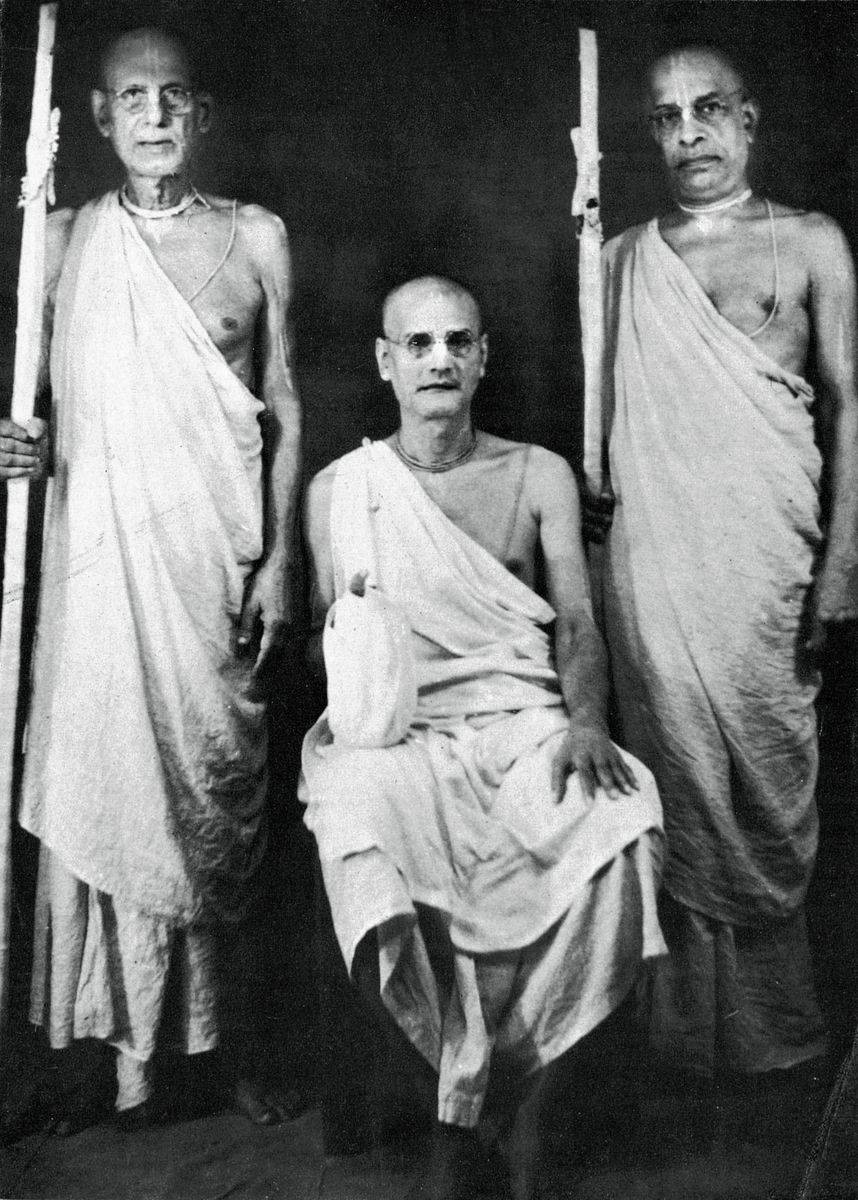 ON DAYS SET ASIDE FOR SELLING Back to Godhead magazine, he packed copies in a cloth sack and boarded the morning train to Delhi. With nowhere to stay in Delhi he had to return to Vrindavan by evening, which gave him only a few hours of daylight. Sales were minimal and he did not always collect enough to cover costs. Some days, he made appointments with wealthy men to request support. A few responded with token donations for his cause. He befriended an Ayurvedic doctor who promised assistance. One day, Bhakti Dayita Madhav Maharaj from the local Gaudiya Math was bicycling by and saw Abhay standing at the gate of the doctor’s large house.

“What are you waiting for?”

“I am waiting to get a five rupee donation,” Abhay called back.

After some hours, Bhakti Dayita Madhav Maharaj again passed by on his bicycle. Abhay was still standing there. “Did you get the five rupees?”

“No. The gentleman has not yet arrived,” Abhay replied, “but I will wait.”

“Let it go. I will give you five rupees.”

Abhay thought for a moment. “Every month?”

LIVING APART FROM HIS FAMILY freed Abhay to pursue support for his mission and the frequency of his letter writing increased. To a prominent Kanpur industrialist he wrote, “The leaders of India in the name of secular government have engaged themselves in everything foreign. They have carefully set aside the treasure house of India’s spiritual assets and are imitating the Western material way of life. So my idea of preaching in the foreign countries means that they are rather fed up with material advancement of knowledge. They are seeking the guidance of the Vedanta Sutra and Bhagavad Gita in an authentic way. And I am sure India will again go back to spiritual life when the principle is accepted by the Europeans and Americans.”1

Abhay’s letters demanded much from their readers. What would a businessman in 1950s Calcutta make of such a petition, sent by a stranger, written in awkward English, arguing that Westerners were seeking guidance from ancient Sanskrit scriptures, and concluding that Hindus would revert to their spiritual roots if Westerners did so first? The whole idea was illogical, unreasonable. Then again, so were most revolutionary ideas.

The Kanpur industrialist did not answer.

January 1, 1957, was the twenty-first anniversary of Bhaktisiddhanta’s passing from this world. During the heyday of his mission, printing presses ran day and night in Gaudiya Math centers. Now the presses had been sold and the institution had divided into many smaller efforts to continue Bhaktisiddhanta’s mission—all within India. Was this the end of prophesies and visions of a worldwide movement, of a global future resurrected from the ashes of Kali Yuga? If his guru, a monumental devotee, could not make it happen, who was Abhay to presume to do better?

You sent your servants door to door, Abhay wrote in a memorial poem, and the preaching then was strong. “Now, in your absence,” he wrote, “everything is darkness.”2

IN THOSE EARLY DAYS, before fame and an international institution, before millions of books and worldwide radio broadcasts of the Hare Krishna mantra, in the days when he was still called Abhay Babu and wore a white dhoti and a shopkeeper’s jacket, A.C. Bhaktivedanta was rebuffed and often reviled for his persistence.

“The history of the West,” he wrote Prime Minister Jawarlal Nehru on August 4, 1958, “beginning from the time of the Greeks and Romans down to the modern age of atomic war, is a continuous chain of sense-gratifying materialism. The result is that the Westerners were never at peace within 3,000 years of historical records. Therefore, India may not waste her time in imitating the Western way of life. Do you think that horseless carriages or telephones or radio communications or any other such ephemeral facilities of life can bring real prosperity? No, they cannot. It is spiritual knowledge which makes a man really rich, not radio sets and motor cars. If you can spare a little time, I am sure to convince you…”

Nehru did not reply.

If he could not get a reply to a letter sent inside India, how realistic was it to expect a better response in America? Would atheistic foreigners addicted to undignified habits ever accept the Gita’s proposal to restrain their senses and live a life of devotion? Still, Mahaprabhu had predicted that the Holy Names would be sung worldwide, so sensible minds must surely be there in America and elsewhere—but how to reach them? Discussing scriptures and chanting mantras were nothing new for Krishna’s devotees inside India: they had been doing so long before the tea-drinking sahibs arrived. America was not India. If he did succeed in going there, was he destined to always be so alone?

In the fall of 1958, contemplating his poverty and isolation, Abhay wrote a poem.

I am sitting alone in Vrindavana-dhama.

In this mood I am getting many realizations.

I have my wife, sons, daughters, grandsons, everything,

But I have no money, so they are a fruitless glory.

Krishna has shown me the naked form of material nature;

By His strength it has all become tasteless to me today.

He had no idea what lay ahead, only that the past could no longer hold him and that some fundamental rip had occurred in the fabric of his life. His parents had died, his marriage had devolved into domestic nausea and his commercial efforts had amounted to nil. He recalled the verse in Srimad Bhagavatam where Krishna described His strategy for the faithful, for those whom He would draw nearer to Him, and Abhay added it to his poem:

“I gradually take away all the wealth of those upon whom I am merciful.”

How was I able to understand this mercy of the all-merciful?

Everyone has abandoned me, seeing me penniless—

This is misery, but it gives me a laugh. I sit alone and laugh.

In this maya-samsara [material world], whom do I really love?

Where have my loving father and mother gone now?

And where are all my elders, who were my own folk?

Who will give me news of them, tell me who?

DONATIONS FOR PRINTING TRICKLED IN and he hoarded every penny until there was enough money to print another issue of Back to Godhead, the first in two years. In October, 1958, 1,000 copies rolled off the grimy letterset press at Kumar Jain’s print shop and Abhay took once more to the streets, a sixty-four-year-old missionary with pointy white rubber shoes and a sack of magazines.

At night, more dreams came of his spiritual master urging him to accept the sannyasa staff, dreams too frequent to ignore. Despite his hesitations, he wrote to Bhaktivilas Tirtha Maharaj, leader of the Chaitanya Math in Calcutta, requesting his blessings to become a sannyasi and travel to America. Approval by Tirtha Maharaj would erase any impression that Abhay was breaking with Bhaktisiddhanta Saraswati’s institution. Tirtha Maharaj responded that before attempting such an ambitious journey, Abhay should join the Chaitanya Math and “have a dignified organization in the background.” Come here and work under me, Tirtha Maharaj proposed, then we will decide about your going abroad.

Abhay knew Tirtha Maharaj barely had enough money to maintain his math, let alone print books or finance a mission to America. Rather, it was Tirtha Maharaj who should join him in executing their guru’s order. Tirtha Maharaj’s secretary, Dr. Verma, remembered the day Abhay came to talk with Tirtha Maharaj about taking a world mission seriously. “The discussion was loud,” he recalled.

Abhay had extended an olive branch and it had been rejected. There was no longer a choice but to separate from his spiritual master’s institution and find a way to America on his own—not only without finances but also without the sanction of the institution that had raised him in devotional life. The next day he called a meeting. In attendance were B.R. Sridhar Maharaj; Sridhar’s disciple, B.S. Govinda Maharaj; Abhay’s son, Vrindavan Chandra; and Abhay’s sister, Bhavatarini. Her marriage had not been going well, and she spent a fair amount of time with Abhay’s family. The group heard him out and gave their opinions.

“Yes, it would be better if you become a sannyasa renunciate,” Bhavatarini said. “Don’t worry about your family, I will take care of them. I have five sons who have income. In any case, in your house they do not want that spiritual way of life.”

“Because of my relationship with your family,” Sridhar Maharaj said, “it would be better if I did not perform the sannyasa ceremony. Best approach Keshava Maharaj in Mathura.”

“YOU MUST DO IT,” Keshava Maharaj said. “Without accepting the renounced order of life, nobody can become a preacher.”

“I don’t know if I have the strength,” Abhay confessed.

“That strength will come from above,” Keshava Maharaj said, “from your Gurudev acting on you. He will give you strength to carry out his order. You just be the instrument.”3

To spread Krishna’s teaching abroad required someone who was both an exemplar of the Bhakti tradition yet flexible enough to adapt its teachings to a world governed by science and technology. Abhay had that balance: a devotee raised in strict Vaishanva fashion yet also educated in chemistry and economics, a person with his feet on the ground and his heart surrendered to God. He had no pretenses about being sent by Krishna, but his determination to do what his guru had asked was unshakeable. He agreed with Keshava Maharaj: the strength to do the impossible would come from above. He just had to agree to become the instrument, and becoming a sannyasi was the first step.

On September 17, 1959, in a fifty-by-twenty-five-foot temple room on the second floor of the Keshavaji Math, B.V. Narayan Maharaj—a disciple of Keshava Maharaj—prepared the sacrificial fire. Bhaktivedanta’s head was shaved, his tilak formed impeccable double lines on his nose and forehead and he was dressed in saffron, the color of those who no longer belonged to the material world. Another disciple of the late Bhaktisiddhanta, Akinchana Krishna Das, sang prayers. A handful of math residents were in attendance at the sannyasa ceremony, which began at 8 a.m. and continued until 3 p.m.,4 and when it ended there were embraces and tears and congratulations.

He walked out into the heat of summer and took a boat to one of the islands in the middle of the Yamuna River where he dragged the boat onto the sand and walked for a while along the sandy shore. Renunciation, it seemed, was worse in the contemplating than in the actual doing of it. “Have the trees forgotten to create fruits for you to eat?” Sage Sukadev declared in the Srimad Bhagavatam. “And if you are tired, are there no open fields for your bed? And if you are thirsty, are there no rivers to quench your thirst?”

He paused to push sand into the shape of a small hill and stuck his bamboo sannyasa staff in the middle of the mound, like the American flag at Iwo Jima or young King Arthur’s sword, Excalibur, rising from its stone. He raised his arms to the sky and shouted, “Haribol! Haribol!” Then he retrieved his staff and made his way back to shore.

In Vrindavan, no one called him Abhay Babu anymore. He was A.C. Bhaktivedanta Swami.

An excerpt from Swami in a Strange Land: How Krishna Came to the West by Joshua M. Greene. Available wherever books are sold. Please visit swamibio.com to learn more.

Strategies to overhaul the “Slaugtherhouse Civilization”