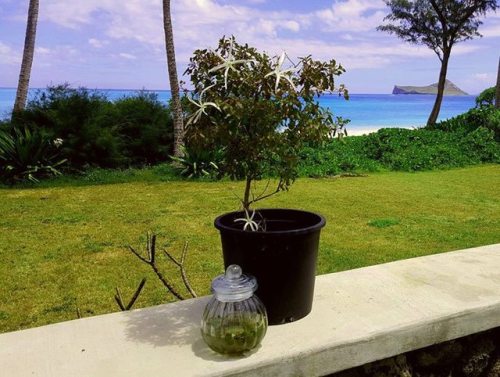 In 1975 Srila Prabhupada visited Govinda’s restaurant in Honolulu, Hawaii. I think it was the first Govinda’s in Iskcon, although at it’s second location in the University area.

The devotees working there were eager to serve their Spiritual Master the day he came to see the restaurant. He was very happy to visit a place where Prasadam was distributed, after all, it is the ‘secret weapon.’ He tried a few items. He had a fresh salad. He didn’t care for the mound of alfalfa sprouts that were generously placed on the top. Of course, he had some crispy cauliflower pakoras, fried in ghee.

Srila Prabhupada tried one of the amazing avo-cheese sandwich wraps, on a freshly made 10″ chapati. Adikarta prabhu could make a three-inch high stack of them, all exactly the same perfect circles.

On that was placed the veggie Monterey Jack cheese that was fried on the grill atop 3 slices of tomato. Once the cheese was beginning to get crisp, Bhakta Knut would scrape it off the grill with his spatula and slide it onto the freshly made chapati. The avo spread was next and a few sprouts, of course, then a sprinkle of masala.

However, what I remember most is when he was given a glass of refreshing iced Tulasi tea. He asked what it was. We explained how there was so much Tulasi in Hawaii, that after we offer the Tulasi garlands to Lord Chaitanya we bring the Prasadam to the restaurant and make a tea out of Her. He said, “That is not to be done!” He understood we were cooking Her to make the tea. He explained how we could put Her in a glass jar in the sun and that it was the accepted way.

In recent years this pure devotee of Krsna, Tulasi Maharani, has become one of the latest wonder cures for various diseases. She is even in some shampoos and other hair care products. Every grocery store in America has Tulasi tea on their shelves.

When I was in India for two months during Kartika I had various health issues. Every Ayura Vedic doctor prescribed Tulasi cough syrup as the best for my cough. I requested and settled for the next best. My cough was severe and lasted over a month, and frankly, made other complications.

I’m sitting here in Hawaii, a few miles away from where the restaurant was located. I was gratefully reminded of this story from a good friend and godbrother, Svatantra , or Sva as he was affectionately called in the olden days.

For the first time, I made a bit of Tulasi sun tea. She does have incredible healing properties and I need all the healing I can get. I didn’t add any sweetener. It’s very pleasant, as some of you know. Who knows, maybe I’ll do it again by putting her in the sun.

I have always witnessed the lenient side of my Spiritual Master but then there were times like this. There was no question. Tulasi Maharani is the topmost devotee. She for the pleasure of Krishna. She cures us by giving us Bhakti. She isn’t meant to be used for mundane cures.

I’m putting this out there for those who might find this helpful.

Two Foundations of a Guru-Disciple Relationship
Srila Bhaktivinoda Thakura: Lord Chaitanya did not advent Himself to liberate only a few men in India!
Tagged under: Nectar

One Response to “Do Vaisnavas drink Tulasi Tea?”