In the Dungeon With Shridhar Swami 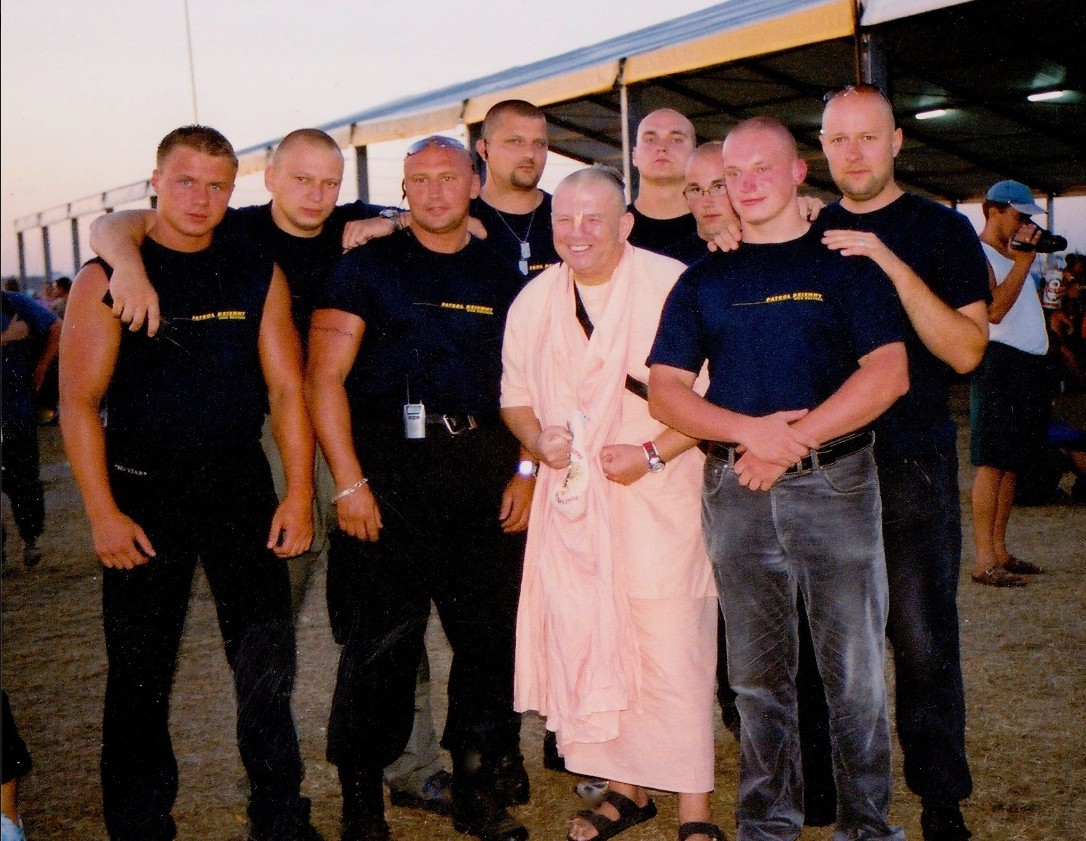 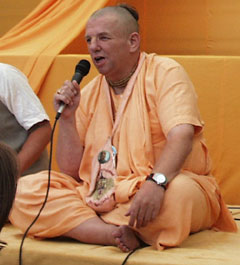 In his diaries, HH Indradyumna Maharaja writes that Shridhar Swami trained him up in his early days of sannyasa. However, even though I’m light years from a sannyasi, I received the best guidance from him because I was fixed up by Shridhar Swami in Kirtan Sagar.

It was soon after Shrila Prabhupada departed for Vaikuntha—just about the time Hare Krishna Land was opened in early 1978—that a terrible riot erupted outside the front gate of the Juhu property. India is a volatile country and such riots often involving dozens of deaths are an all too common event there. The riot began when an illegal squatter on the property assaulted and verbally abused a hot-headed chokidar, or temple gatekeeper. In the ensuing brawl, the squatter met his end through a blow from another chokidar. With a man lying dead, a scuffle was now transformed into a riot wherein an incensed crowd converged around the property hurling rocks. Fortunately the riff-raff remained outside on the street, but the devotees had to take shelter for their lives. The riot did not involve even one single ISKCON devotee, neither Indian nor foreign—only local Indians participated in the melee. Nevertheless, six foreign devotees would be arrested and tried for murder in its aftermath. The senior devotee of those “Bombay Six” was Shridhar Swami, and the other accused devotees were thankful to have his stalwart example of surrender to Shrila Prabhupada and the holy name.

The riot simmered down late into the night, and the next day the police showed up demanding witnesses. Since I had been at the front gate greeting guests, I had seen the entire incident. Therefore the temple authorities asked me to supply a statement. The other devotees who came forward with information were Jagat Purush, Mahabuddhi, Amogha Lila and Ruchi Sevana. Shridhar Swami held a Canadian passport, Ruchi Sevana was from Brazil while the rest of us were Americans. As foreigners, we had heard that India can be a difficult place, and now we were going to find that out first hand.

The police said that they wanted our statements at the station and, wishing to give all cooperation, we agreed to go along. The six of us were quietly driven to the police station in a police jeep. At the station, we were led into a waiting room and seated on a bench. Then the big burly cop who had picked us up left the room, closed the door and, taking his handcuffs from his belt, used them to lock the hasp. Always cheerful, Shridhar Swami just laughed out loud and turned to us saying, “I don’t think we’re going anywhere any time soon, Prabhus. Chant Hare Krishna.” He then returned to his rounds.. A few minutes later a ranking cop, who spoke a few words of English, returned and announced through the door’s window that they were going to frame charges. I quipped, “You mean you’re going to frame us?” The Maharaja chuckled briefly and went back to his japa. Our statements were never taken; it had been a ploy to arrest foreign devotees.

We were handcuffed and chained together, then marched through the streets. We were dressed in dhotis and some passers-by taunted us. One man shouted “This is great day.” I responded, “This is a great day for you to cry.” Unlike me, Shridhar Swami was too absorbed in his chanting of the maha-mantra to be concerned about life’s little injustices.

The Santa Cruz lock-up was a disgrace to any penal system, especially considering that the detainees had been merely charged with—but had not been found guilty of—any crime. The police who ran such a torture chamber should themselves have been locked up, but that will be for Lord Yama to decide. I was shocked when I counted one hundred twenty men in four horribly over-overcrowded cells. For these men, there was only one shower and “toilet” which had running water for one hour a day. Hence, there was a huge mound of waste several feet high protruding above the “toilet.” To get to that mound, we had to wade for six or eight feet through a six-inch cesspool of urine. However, the pile of rejected food from the prisoners’ plates next to the toilet was even more foul-smelling. Mosquitos were everywhere while bugs constantly crawled up the dank, stone walls. We considered our situation philosophically: although innocent, some lurking karma-phal from a former existence must have needed clearing away.

Despite all these difficulties, Shridhar Swami remained his ever-joyful self and continuously celebrated the holy name of Krishna day and night. No wonder the Indians would one day nick name him “the jolly swami.” One of the twenty-six qualities of a devotee is “always cheerful” and even in the worst of situations Maharaja displayed that quality.

Pasted onto the wall was a page from a Hindi book, so Shridhar Swami asked Amogha Lila, who was born in India as a missionary’s son and who knew Devanagari, to decipher it. We were surprised that the words were “Kirtan Sagar”. Shridhar Swami lit up. “Hey, Prabhus,” he declared jubilantly, “that’s why Krishna put us here. This is the Ocean of the Holy Name.” He then returned to chanting. In the evening we’d have kirtan and aratik to manasa-murtis while Shridhar Swami would pass around the imaginary flame. Many of the prisoners would attend for “darshan”. Unlike the police, they were very respectful to us, and we shared a lot of love with one another.

Shridhar Swami sometimes gave classes in the evening, and quoted many Sanskrit verses. One verse in particular from Bhagavad Gita left an impression on me: “But those who worship Me, giving up all their activities unto Me and being devoted to Me without deviation, engaged in devotional service and always meditating upon Me, having fixed their minds upon Me, O son of Partha—for them I am the swift deliverer from the ocean of birth and death.” (BGAI 12.6-7) Just by hearing Lord Krishna’s promise, we developed faith that our ordeal would come to an end.

Once a couple of reporters from a leading English news weekly came to interview us, introducing themselves through the iron bars. As I started to speak up, Shridhar Swami barked, “Don’t talk to them, Patit. Hare Krishna.” Shridhar Swami was not simply jolly, he was very sensible. One misprinted “quote” in the press could have ruined future chances for a fair trial. The reporters became angry and replied, “You mean we’ve slogged our butts off to come here and you won’t tell us your side of the story?” Shridhar Swami answered with a laugh, “That’s right. Hare Krishna.” The reporters were more concerned for “their story” than for the sake of justice and Shridhar Swami knew it.

During the two weeks in confinement and through the ensuing year-long trial, I always looked up to Shridhar Swami’s example of finding bliss in the worst of situations. Any or all of us were facing lifelong imprisonment. But the Maharaja’s staunch attitude and example were inspiring. He was always thoroughly sheltered in Prabhupada, always faithful that Shri Krishna keeps His promise to protectHis devotees as He did for Arjuna. He often counseled, “Just keep chanting and everything will be all right. Don’t worry. Hare Krishna.” Once a fellow inmate pulled from his plate of an eight-inch dead millipede that had been cooked and served in his prison grub. Shridhar Swami laughed and noted that the chef had an unusual talent for spices.

The trial started some weeks after we were released. Once a bloodied shirt was produced as “proof” that devotees had beaten innocent members of the public. One of our lawyers, Shri Maheshwari, cautioned us not to worry, “It’s chicken blood, this is a very common trick.” The witness pointed accusingly at us. Noting that the blood—and therefore the beating—was on the back of the shirt, our lawyer asked him how he saw who was beating him. In fact, our attorney Shri Maheshwari became a devotee, a disciple of Shri Radhanath Swami, and to this day he’s fixed up as Mahaprabhu das.

Adhikary, the Bengali brahmana guard, was found guilty and received life imprisonment for which he would serve twelve years. By Lord Shri Krishna’s grace, all devotees were acquitted. However, Shridhar Swami was not even moved by the verdict. For most people, such exoneration would be a time for celebration. He simply stood up and filed out of the courtroom, saying, “Let’s go. Time to move on. Hare Krishna.” Our late lamented Godbrother His Holiness Shridhar Maharaja was the same person and displayed the same qualities whether in jail or cleared of charges. He simply kept chanting Hare Krishna. His very life fulfills the purport of Shri Krishna’s description of a devotee to Arjuna:

“One who is not envious but is a kind friend to all living entities, who does not think himself a proprietor and is free from false ego, who is equal in both happiness and distress, who is tolerant, always satisfied, self-controlled, and engaged in devotional service with determination, his mind and intelligence fixed on Me—such a devotee of Mine is very dear to Me.” (BG 12.13-14)

10 Responses to “In the Dungeon With Shridhar Swami”