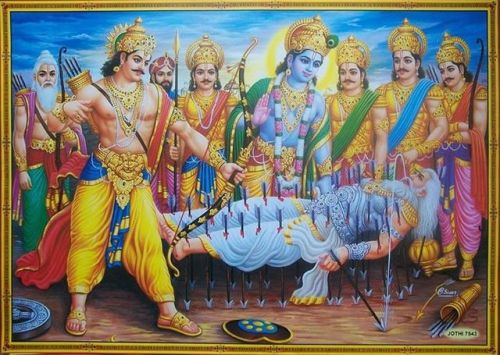 Explanation of Bhisma-pancaka.
“If one is capable the Bhisma-panchaka vow will be observed for the sake of love of God for the five days from the eleventh day (of the bright lunar fortnight in Kartika) up till the full moon day. The prescriptions for this have been given in the Vrata-Khanda-Kartika Mahatmya of the Padma-purana, in the Skanda Purana and in the Visnu-rahasya.”

After observing the fast of Prabhodhini Ekadasi in the month of Kartik, one should fast for the last five days of Kartik which are called Bhisma Pancaka. Lord Siva said that the Supreme Lord Himself has given these five days to Bhisma and it is therefore called the five days of Bhisma or Bhisma Pancaka. This fast on these last five days of the light part of Kartik were previously performed by Vasistha, Brghu, Garga, etc., in Satyayuga. Ambarisha Maharaja performed this fast and gave up all of his royal happiness in Tretayuga.

Celebrated brahmanas perform this fast with chanting of japa and performance of sacrifices, according to the scriptural rules and regulations. So do ksatriyas and vaisyas who are following truthfulness and cleanliness. This five day fast is difficult for those who are hypocrites and not serious. If someone observes this fast, he has observed all kinds of fasts, because it is greatly meritorious and frees one from great sins. Therefore, everyone should make a great endeavor to fast on these last five days of Bhismadeva.
A nice video of the glorious departure of Mahajana Bhismadeva: https://is.gd/IC7wqI