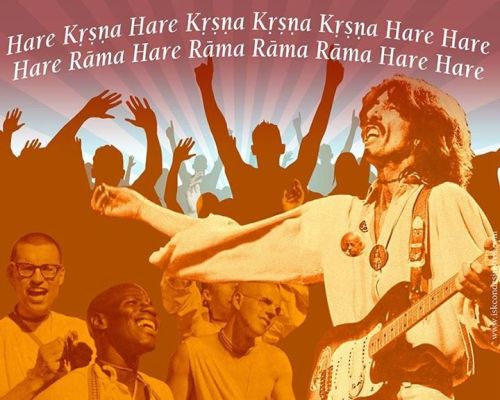 There was a fanzine called “Write Thing” and in one issue, there is this story about an American fan named Kim Korstand, who met George while studying in Berlin in 1976. This is in the Oct/Nov 1978 issue.

“Well my time in Berlin was just starting, I hadn’t made many friends yet, so I was all by myself. All that I had to my name in possessions was a stereo and my Beatles records. So I played them nonstop. I started to get into the lyrics and not just the beat. I started wondering what was the meaning to the songs that George was singing, because they were much more than just songs. For instance when he sings, “My Sweet Lord,” he mentions Hare Krishna and Rama, I wanted to know what that was. I naturally went to the Krishna Temple in Berlin, talked to the devotees and got it straight in my mind what George meant. the devotees became my friends and when summer came they told me about the “Bhaktivedanta Manor” and their spiritual master, Srila Prabhupada, was coming to England July 20, 1976 and would I be interested in going. I said yes.

So they drove to England, to a little village called Letchmore Heath (about a half hour outside London. They told me that George gave them the Manor). We went to the evening service that night and when we walked into the room, the spiritual master, Srila Prabhupada was speaking, and right in front of him, was George (he was wearing a dhoti). I almost fainted!

The next afternoon George came up to talk to me since I was new and a guest. He thought he’d fill me in on a bit about Krishna Consciousness. We talked for about an hour or more. He told me about the principals and the history of the movement. He gave me some neck beads and also some chanting beads and he told me quite firmly to chant HARE KRISHNA, he said, “if you chant the Lord’s names, it will prove that you will be happy and sublime.” He was very, very kind and considerate, but also a very serious individual. He said, if I liked him, then please follow his example, and this would make him happy.

George was very disciplined and made me feel like I should try and change my lifestyle. I have tried, but it is very difficult. I hope if and when I ever see George again, he can see me in a better light.

By meeting George, I now can understand him and his music, very well. My life has changed since meeting him, because when anything happens and it doesn’t feel right, I always think of George and the talk we had. I truly think George Harrison changed my life!“

The following video has George leading a kirtan of the Hare Krishna mantra at Bhaktivedanta Manor with some of his close Hare Krishna devotee friends like Guru Das and Mukunda das Goswami. You can chant along with George. As we read, he wants us to:

The Mock-Tudor country house donated by George Harrison was known as “Piggots Manor” . built in 1884. It is now a center for ISKCON, the International Society For Krishna Consciousness bhakti-yoga rituals and learning, that he donated, in 1973. Millions have since visited since then. There is a memorial to Geroge there called “The George Harrison Gardens”. It is open to the public and they serve a free vegetarian feast every Sunday. They are open daily.

Bhaktivedanta Manor is an oasis of spiritual inspiration just north of London in the Hertfordshire countryside. The estate allows one to retreat to a world of yoga, contemplation, sacred music and dance, vegetarian food, theatre, seminars, workshops, community schooling, and the country’s largest fully operational organic dairy where cows and bulls are protected throughout their lives. All this is set alongside a gorgeous temple of Krishna amid quiet gardens. This unique center is open to the public free of charge all year round.