Gaura-Purnima, the full moon of the month of phalgun 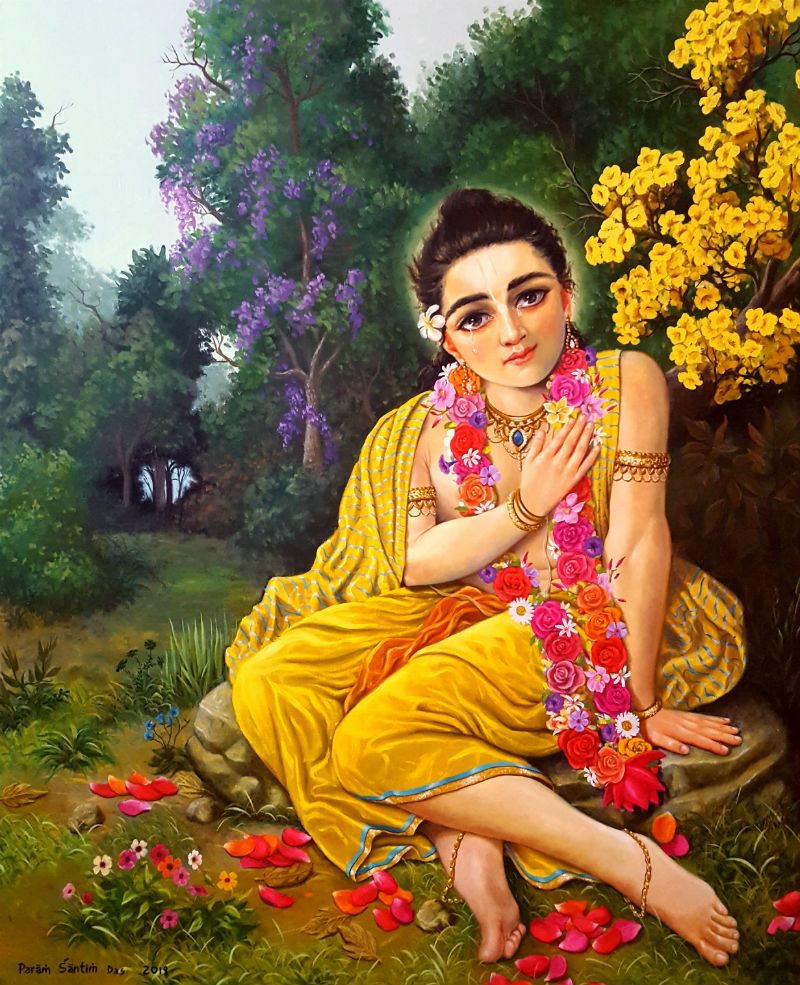 Hare Krishna. Today is Gaura-purnima day. The purnima, the full moon of the month of phalgun. These two months, phalgun and caitra is the vasanta season, springtime in India. In India there are six seasons and each season consists of two months. Vasanta, spring is considered to be the king of all seasons – rthuraj. This is the best of the times. Of all the six seasons Vasanta or spring is the best because the whole atmosphere at this time becomes very beautiful. The winter is over and the weather starts to warm up. All the trees and plants become full of flowers.

When Krishna performs His eternal pastimes with the cowherd community of Vrindavan and of all His activities there His most wonderful activity is His loving exchange with the gopis, the cowherd damsels. And of all the cowherd damsels Srimati Radharani is the topmost. She is the principle gopi. Spiritual sky is Krishna’s manifestation of His internal potency. Spiritual sky comprises of Krishna’s internal potency, anataranga sakti. Hence in that loving relationship there is some competition.

These obstacles often take place due to Krishna’s loving exchange with some other gopi. Some other gopis comes and takes Krishna away. Like Candravali appears to be the opposite camp. There appears to be a competition between Candravali’s camp and Radharani’s camp. Who can bring Krishna to their presiding personality! Candravalis group tries to bring Krishna to candrvali. Radharani’s group tries to keep Krishna with Srimati Radharani.

So in this way there are different other gopis and sometimes Krishna has some loving exchanges with them. And that increases Radharani’s anger. That causes Radharani’s anger. So on one such occasion there is a very wonderful internal associate of Krishna, spiritual associate of Krishna. Her name is Viraja. Viraja once took Krishna to her kunja. Kunja means the garden house where they eat, they have their exchanges there.

So Krishna was in Viraja’s kunj, Viraja’s abode and Radharani got to know that Krishna was there. Krishna was missing so She started to look for Krishna all around and at that time when she got to know that Krishna was there at Viraja’s kunj. In order to attract Krishna She created a very beautiful place and it was in the Svetadvip. It is known as the milk island, the island in a milk ocean. In Vrindavan there is a region, which is made of milk. She created an island there. She made that island so beautiful and then she picked up the flute and started to play the flute.

Vrindavan is the most beautiful forest. That region of the spiritual sky has twelve forests and one of them is Vrindavan, which is the best of all the twelve forests. And Krishna said this is the most beautiful Vrindavan. And since it was newly created it was new. It was apparently not there before. Srimati Radharani created it therefore Krishna named that place as New Vrindavan, Nava Vrindavan. And since that place was an island Krishna called it New Island or Navadvip. Dvip means an island. Then what happened? As Krishna embrace Srimati Radharani, Krishna and Radha became one. And that is Sri Krishna Caitanya Mahaprabhu.

That is the wonderful aspect of Navadvip, that new island. The first consideration is that this particular place in the spiritual sky has been created by Srimati Radharani. And in that place Srimati Radharani and Krishna became one. That is Navadvip. In Navadvip Krishna manifested in a very special way. Krishna manifests here together with Radharani in one form. That is Sri Krishna Caitanya Mahaprabhu.

On the twenty-eight manvantara of Vivasvata Manu, seventh month, almost during the middle part of the day of Brahma. There are fourteen Manus in a day of Brahma. Now seventh Manu is Vivasata Manu. So it is kind of the middle of Brahma’s day. And in one manvantara there are seventy-two catur-yugas and out of the seventy-two the twenty-eight catur-yuga towards the end of Dvarpa-yuga, Brajendranandan Krishna, the son of Nanda Maharaj of Vrindavan – the original Supreme Personality of Godhead comes to this material nature. Then after performing His pastimes He considers,

It has also been explained by Srila Krishnadas Kaviraj Goswami. Actually He is expressing Krishna’s feelings. Krishna is saying,

That in the mood of awe and reveration, awe and reverence, awe and veneration when one renders devotional service following vaidhi-bhakti, he goes to Vaikuntha when he achieves perfection. So it is not possible to understand Vrindavan. They get four types of liberation by following vaidhi-bhakti – sarupya, samipya, salokya and sarsti – and they go to Vaikuntha, but Vraja is beyond Vaikuntha. So He is saying,

So He says, yuga-dharma pravartaimu nama-sankirtana – “I will establish the yuga dharma of harinam sankirtan and by doing that I will give these four types of relationships – dasya, sakhy, vatsalya and madhurya – and by Myself who has assumed the mood of a devotee, and by acting as a devotee I will teach everybody how to become a devotee of Krishna. In this way I will inundate the age of kali and make everybody dance in ecstasy. I will inundate the entire world with this loving relationship of krsna-prema and make everybody dance in ecstasy.” That is why Sri Krishna came as Sri Krishna Caitanya Mahaprabhu in this particular place called Navadvip. And what is Navadvip? As I just mentioned earlier, this Navadvip is New Vrindavan. In this Navadvip Radha and Krishna became one. This Navadvip has been created by Srimati Radharani. It is not just an ordinary place. This place has been personally created by Srimati Radharani. So you can well imagine how special this place is.

Just by coming here, just by associating with the devotees of Krishna, just by hearing about Krishna’s activities and pastimes as Sri Krishna Caitanya Mahaprabhu one can develop krsna-prema. Just by being here, just by offering obeisances, one offers his worship to the Supreme Personality of Godhead. Just by taking each step in Navadvip one derives the benefit of ten million horse sacrifices, asvamedha yajna. The performance of one horse sacrifice makes one the king of the earth planet. A hundred horse sacrifices makes one the king of heaven, Indra. Now just consider, taking one step in Navadvip one derives the benefit of ten billion horse sacrifices. This is what Navadvip means. Now that we are all here lets try to take that ultimate benefit of this place. Every dust particle of Navadvip is surcharged with spiritual potency. All the trees and plants here are desire trees, kalpavrksa. The cows here are the surabhi cows. And Caitanya Mahaprabhu’s eternal pastimes are going on here. We simply have to develop our spiritual vision then we will be able to see those pastimes. Caitanya Mahaprabhu manifested this particular place in here on the earth planet in this age of kali with a very special mission, very special purpose. The purpose is to give krsna-prema. Therefore Caitanya Mahaprabhu has been worshipped as,

Krsna-prema-pradaya te – the special aspect of Sri Krishna Caitanya Mahaprabhu is that He distributes, He gives krsna-prema. That is why Krishna has appeared, krsnaya krsna-caitanya- Krishna has appeared as Caitanya Mahaprabhu to distribute krsna-prema. One verse has been written on the board. The board is so far away that I felt hardly any of you will be able to read the verse from the board therefore I did not get into reading the verse. I will just read the verse now. It says,

Meaning anarpita-carim carat that which was not given before for a long long time. In order to distribute that karunayavatirnah kalau. Sri Krishna Caitanya Mahaprabhu has appeared in the age of kali. And what is that unusual asset? What is that unusual gift that Krishna is giving as Sri Caitanya Mahaprabhu? unnatojjvala-rasam sva-bhakti-sriyam – bhakti sri – the wealth of devotion, wealth of His own devotion, sva-bhakti-sriyam in unnatojjvala-rasam, in the most elevate, unnato, most elevated and ujjvala in most brilliant-rasam sva-bhakti-sriyam.

Again we are trying to intellectually conceive it but it is a totally spiritual consideration. Radharani is the personification of Hladini sakti. Hladini sakti is intensified just as the milk is churned into butter, then butter is made into ghee. In this way the more and more concentrated form of a substance take the shape of a specific form. Similarly the substance of hladini sakti takes the most intense form in mahabhava, the loving relationship. The highest most intense loving relationship with Krishna and that is Srimati Radharani.

Laksmidevi was begging Krishna, “Give me some vraja-prema.” She asked Narayan, “Will you please allow me to enter into Vrindavan and watch Your Vraja pastimes? Will You please allow me to dance in Your rasa-lila?” Narayan said, “Yes, but you have to follow a resident of Vraja in order to become eligible. Laksmidevi said, “How is it possible? I am Laksmi. How can I stoop down to anybody else? That will be and insult to Your position. I am Your eternal consort and I am Laksmi. I cannot bow down to anybody else. I cannot become subservient to anybody else.” Then Narayan said, “Okay. Then forget about entering into Vraja.”

Whomever He sees He tells him in a very humble mood that, “Please purchase Me with the price of chanting this holy name.”

In this way Nityananda Prabhu rolls on the ground and it appears as if a golden mountain is rolling on the ground.

With the flood of love of krsna-prema Nityananda Prabhu appeared in the land of Gauda-dese and He inundated the whole world filled it with this krsna-prema. Everybody became inundated. Everybody drowned in that love and those who did not submit themselves to this inundation even they got carried away by the waves of this ocean.

This is how mercifully Sri Caitanya Mahaprabhu came to distribute this krsna-prema with the mood of Srimati Radharani. So today is the day Sri Caitanya Mahaprabhu appeared in this Navadvip, in this Nava Vrindavan, a very special Vrindavan where He is distributing krsna-prema. He is still performing His pastimes, [Bengali] Still today, gauravani, Sri Krishna Caitanya Mahaprabhu Gauranga is performing His pastimes, nitya-lila. Only some fortunate souls get to see those pastimes. Who are those fortunate souls who have developed their spiritual vision? How to develop that spiritual vision? By chanting the holy name, jivan mukhi hi jiva dau (?) The service rendered by different senses – with our ears we hear, with our skin we touch and so forth but what does the tongue do? sevon mukhe hi jivadau [Brs. 1.2.234] What does the tongue or jiva do? Jiva does two activities, tongue speaks and tastes. So if we can engage our tongue in these two very simple activities, chant the holy name of the Lord and honor krsna prasad. Just by doing these two activities svayam eva sphuraty adah – the holy name, Krishna will automatically – svayam eva will become manifest. Is it difficult? [Audience answer, “No.”] Who doesn’t like to eat delicious krsna prasad.

Very mercifully Krishna gave His maha prasad so we can just relish without karma. This will be the service to Krishna through our tongue and we can chant the holy name and by doing that we can experience Krishna in our hearts svayam eva sphuraty adah. Krishna will manifest. Krishna will appear Himself in our hearts. So this is how simple the process is in this age of kali. So now HH Bhakti Purusottama Maharaj will continue the class. [End of recording..]

[Audio of this lecture and others are available on mayapur. com/downloads.]