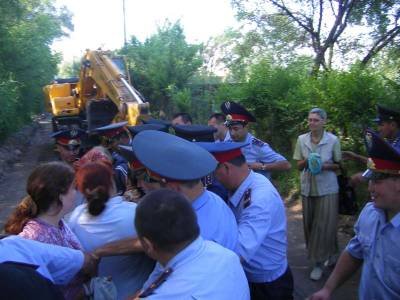 On the morning of June 15, 2007, authorities of the Karasai District demolished another 12 houses of the followers of the Society for Krishna Consciousness.

The court executors were accompanied by one bus of policemen and one bus of laborers, an ambulance, the fire-squad, and two earth excavators. The group arrived at the community at 7 AM. The police blocked all entrances to the community.

The timing of this “operation” was chosen to exclude the presence of reporters and persons from international and human rights organizations. However, Ninel Fokina, Director of the Almaty Helsinki Committee was informed and issued an emergency appeal to the Permanent Mission of the Republic of Kazakhstan to OSCE and to the Kazakh Foreign Minister M. Tazhin. The attempt to find out who was in charge of the operation and to see any documents were unsuccessful. However two leaders of the demolition squad were identified as the senior court executor of the Karasai district, A. Baichapanov, and executor S. Baimukhanov.

Several minutes after the beginning of the operation the Hakim of Zhetysu village, B.S. Akhmettayev, appeared on the spot. Immaculately dressed in a business suit, with a sledgehammer in hands, he was resolutely walked toward the demolition site. However, when he noticed that he was being photographed, the Hakim immediately threw his sledgehammer to the bushes.

The Hakim, Akhmettayev, categorically refused to speak with the reporters and introduced himself as a worker.

The owners of some homes were absent as they had not been informed of the demolition. Their belongings were left lying on the street.

The demolition was performed with lightning speed. By 10 AM everything was finished. 12 houses of the faithful were completely destroyed.

All of the hearings regarding these cases were conducted without informing the owners of the court sessions. Thus, none of the owners had the chance to defend their case. After the first instance was lost, the court executives did not present the rulings to the members until after the period to appeal had expired. Thus the process of appeal to the second instance court could not be followed.

The members of Society for Krishna Consciousness are gravely concerned that their temple will be destroyed next.

On June 5, 2007, the Society received orders from the Karasai District Hakim B. Kutpanov to demolish all buildings at the farm, including the temple.

Kutpanov stated that if the faithful did not destroy their houses in 10 days that it would be done by force. The term expired on June 15 and thus the thus the faithful are fearful the farm buildings, including the temple, would also be demolished.

The temple remains under the threat of destruction. The temple, the cowshed and other buildings on the territory of the community may be destroyed at any moment.

See pictures of the events of June 15: